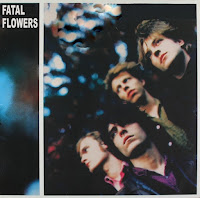 The 1980s. How many times have I already "sung the praises" of the music of that era on these pages? Too many times most likely. But let's recap as it is relevant for this post.

In the past weeks the news broke that Fatal Flowers is doing a reunion tour of the Netherlands and I could not care less. The band never did something for me at the time, despite the fact that it was hyped a lot in the second half of the 80s.

For me that was an era of disappointing albums. From Paul McCartney to The Rolling Stones/Mick Jagger solo and from Bob Dylan to Neil Young and Lou Reed, all my musical heroes were delivering one mediocre of not bad album after another, which I bought, being a fan anyway, until I even stopped in some instances. (I will make a slight exception for Neil Young here though.) Living on a student budget there was not much money left for other musical expenses and I did not hear a lot that really caught my attention in a positive way. I even had the impression that this might just be it where music was concerned, as it turned out to be for many of my friends.

So, Younger Days. While reading a long interview with singer-songwriter Richard Janssen I remembered owning one album. Don't ask me why I bought it. It was down-priced in the record department of a department store, since bankrupted. In my memory I did not even play the album through. I just did not like the guitar sound that dominates most of the album.

Enter 2019 and I found an unblemished album in my record collection. Took it out and noticed, somewhat to my surprise that the innersleeve has discoloured a little, but the record itself proved scratchless.

From the very first second I was riveted. Nice rock and roll rolled over me, while I was stuck in place. A 'What I Like About You'-'You Really Got Me' riffing and drumming came by, with enough variation to make it its own. When with 'Good Enough' an even better song comes by, I reflect on how different my ears listened to music in the mid 80s than now in the late 10s. My musical tastes have truly changed. I will not go as far as to state that Younger Days is a 2019 album, but from listening to it now for the first time since 1987 or 88, it is not that far beside the point. Albums like this are made in this decade.

The famous single and title song, although only a very minor hit at the time, is nice for nostalgic reasons, but not the best song on this album. (Rock) songs like 'Well Baby' and 'Gimme Some Truth' or the darker, more muted 'Ballroom' are. In that sense the album sounds timeless but also outdated. When Fatal Flowers tips its hat to early 80s Golden Earring or the soft ZZ Top like guitar solo in 'Ballroom' it becomes a set time document. The influences, logically, are from a time long ago. Listen and you'll find more references. And yet I can imagine an album like Younger Days being made today without the music changing a lot.

Fatal Flowers wasn't a unique band. What I understand much better over 30 years later, is that like R.E.M. in the mid 80s, it was doing something no one else was doing at the time: escaping the doom and gloom of the 80s and reach back musically to rock music from before 1980. It makes it easy for me to warm to the music on Younger Days with ease in 2019.

What finally surprises me, is that I recognise a few songs and I have no clue why. I know for, well almost, certain I have not played this album more than twice, if even that, in the past 30 something years. I am glad I have, as on reflection I have made a good investment anyway. Never throw music away is my adagium for quite some time and it pays out once again.