From Babylon To Avalon. The Celtic Social Club 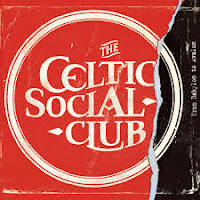 Today we point you to three albums, in a somewhat shorter review as these albums deserve a mention on this blog. Here's #3 from the U.K. and France.

The name of this band conjures up a memory of another album 'Tuesday Night Music Club' and of course the Buena Vista Social Club. Two more collaborative albums than this one. The Celtic Social Club is a real band, releasing its third album, though all members play in other bands as well.

The music of the band has the sweet sour base of melancholy with upbeat rhythms, where the music keeps switching between major and minor. Celtic is not in the name of this band for nothing. The Irish influences are all over the album. At the same time this is not Dropkick Murphies who have punked up its Irish songs. The Celtic Social Club have a totally different outset: it is bent on finding the best possible mix between poprock and Irish/Celtic folk music.

This is the strong point of From Babylon To Avalon as well as its Achilles heel. Yes, this band knows how to write an excellent pop melody, but tends to make it a little too soft polished at times. Perfection is not always best. At the same time there is some real beauty to be found here. In that sense it is like Ireland itself. Having camped there for a few weeks, I can still feel the cold in my bones, while my mind's eye shows me beautiful sunbathed green hills and the smell of peat fires from old, isolated farms' chimneys. Contrasts is all what Ireland seemed about from a tourist's point of view.

The Celtic Social Club can be called a super folk formation with members from the U.K. and France. It has found a new singer in Dan Donnelly who can be found on these pages late last year with his solo album 'Are We Having Fun Yet?'. Yes, I answered. And he brings his nice voice to From Babylon To Avalon. An album where rock guitars and drums are mixed with a violin, uilleann pipes and tin whistles. The rock side sort of wins, yet the mood is mostly set by the more traditional instruments. The mix wins me over in the end, as this album is not only beautifully but also lovingly made with care for many details.