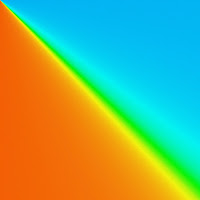 Now at first I read Endless Suffering as the album's title. Quite a difference with the actual title, End Of Suffering. The difference between what Frank Carter sings in the opening song 'Why A Butterfly Can't Love A Spider': "When I'm high, I'm in heaven, when I'm low, I'm in hell".

Frank Carter debuted on this blog in 2015 with his first album with The Rattlesnakes, 'Blossom'. Since I lost track of him and missed the sophomore album 'Modern Ruin' from 2017. With End Of Suffering the band re-enters my universe with a bang. Tight, nearly frillless and extremely to the point. This album sounds like there's no time to lose, not one single second, with loads of stories to tell.

Drummer Gareth Grover keeps things very, very tight. Just pounding away in a straight line the bass and guitars can only follow suit. The result is a tight rock outfit. Something that has been done before, for sure, perhaps even better, but not much better. For that Frank Carter & The Rattlesnakes play far too well and their songs are too good. If anything there seems to be no compromise. Things go forward, ever onwards with relentless pace. In 'Heartbreaker' things may totally unwind to the sound of an old, rusty acoustic guitar and a relaxed voice, the punky underground keeps ruling, only to return later on in the song.

Where things have changed in the four years since 'Blossom' is that Frank Carter c.s. seem to hold back just this little here and there, making the songs just a little more attractive to listen to. Yes, things are loud and rock prevails, there is some more air between the instruments and singer. There's no longer a need or longing to close everything up with music. A little less anger or maturity, perhaps even self-assuredness? Who knows, a little less punk does the album good. While the drums pound in 'Love Games' and a distorted guitar plays a large role, there is room for a keyboard to take a lead role here and there. Thomas Mitchener's role has been expanded in the band. Switching from bass to second guitarist and synths makes a difference and shows positively in the whole.

What remained is a dark view on life in general. Don't expect a dose of happiness, do expect a jolt of energy that certainly can make the listener a lot happier from just listening.

Halfway into the album a surprising thing does happen, making End of Suffering so much more interesting. Slower, more open rock songs with an alternative pop feel are presented. Frank Carter & The Rattlesnakes however do not lose out on intensity, as shown in the building up of an ever larger storm in 'Angel Wings', it does change the mood of the album. The main influence of the band is U.S. alternative rock with a grunge edge to it. Bands that I've forgotten the names of by now present themselves to me, with one major difference: they nearly all bored me within a few songs. This album does not for one second. When halfway into 'Super Villain' I get the impression Pink could have sung this song with only some minor changes to the arrangement and Frank Carter gets away with it gloriously I am convinced; End Of Suffering is an oh so nice rock album.

On End Of Suffering Frank Carter & The Rattlesnakes are able to play with the mood of the listener while providing doses of positive energy. The album is so much more diverse than I ever expected up front. That's what growth does to a band, I suppose, in combination with daring to show that growth by leaving the beaten track behind. The bio coming with the album concludes "there won't be a better album this year". That remains to be seen, impressive it certainly is though.

And to save the last for last. 'Oh, a ballad', was my response to the beginning of the final song and then I started to notice how the song played itself out. How it builds up and upwards, ever stronger, tighter and melodic. A girl's voice enters, Carter's daughter, and yes, this truly works and heightens the intenseness of 'End Of Suffering'. So, hey, that claim may just turn out to be true anyway. Time will tell, but a note has been made.