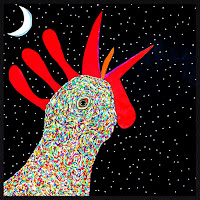 Today is the day we do a trio of reviews. The first one is a mysterious album by Daniel Norgren.

The artwork suggests a naive sort of art inside. Music that is not so much skilled as it is enthusiastic. Listening to Wooh Dang my association went out more towards the background than at the brightly coloured cock screaming to the "new" moon. Yes, dark stuff, folks, is what I'm talking about.

Wooh Dang is an intense album on which Daniel Norgren shows a few sides to his musical self. From somewhat strange but still tender ballads like 'So Glad' to a 30s field recording down on a dusty farm in Mississippi, 'Dandelion Time', is a small step for Daniel Norgren. On his new album he jumps through decades like a time traveller. Sometimes sounding older than the music of choice as if a late 60s band like Canned Heat was recorded in the late 30s, recorded in mono in 'Let Love Run The Game'. What could almost be forgotten in the process, is how beautiful this song is. Norgren's voice sounds totally worn out, torn apart by use and time. The singing is definitely strained, the emotions rife.

Listening to Wooh Dang there are several of these surprises. The album was recorded in an old house that appeared not to have been lived in for at least 80 years. That is 1939 when it was abandoned. Daniel Norgren has certainly captured a mood that can be called old, rusty and dusty. Like Neil Young did in the 70s, yes, you'll hear that influence regularly in a fine way. If there's one thing Norgren is not, it is in a hurry. It makes for a lacklustre sounding album. The surprising thing is that this can be written in a positive way. Wooh Dang is totally its own, timeless like some Ry Cooder albums once were, but at a much more elementary musical level. More not than often Norgren tries to remain basic in recording technique and dressing up of songs. Hence a part of the darkness I started off with is explained. The rest you'll find while listening, as this comes mandatory, I'm afraid.

There are a lot of handles you can hang your hat and coat on here in this post. Use them and take the time to acquaint yourself with Daniel Norgren. There's more than enough to enjoy on Wooh Dang.

You can buy Wooh Dang here: