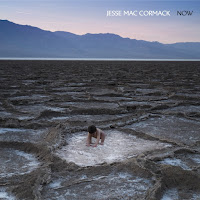 'Now', now that is a title that brings me back to my earliest childhood and musical memories, when 'Now' was be b-side of 'This Strange Effect', Dave Berry's biggest, Ray Davies penned, hit over here in NL. A song my aunt played a lot on her small gramophone device.

In 2019 it is the title of Jesse Mac Cormack's new album. Those following this blog will recognise his name. He first popped up after his support show for Sophie Hunger late in 2015. With his intense, if not haunted, show he made an impression on Wo. and .No resulting in a review of his EP 'Crush' in the same month and several appearances in .No's Concertzender radio show 'Kairos'. After that silence settled in until the month of May of 2019.

I would have been surprised had Now been an album where light shone through all the windows, and soft Caribbean sounds laid down a mellow mood. Lo and behold! In the second song 'No Love Go' Mac Cormack presents us a steel drum in the intro. Something of a wrong footing and the song descends in darkness of the 80s kind but from a love gone wrong vantage point instead of the end of the world in some apocalyptic sense or other typical for that period.

From the beginning Jesse Mac Cormack is exorcising one or another of his demons. Some perhaps successful others certainly not as he wrings himself inside out for our entertainment. In some moments, like in the already mentioned song, he reaches for a grandeur not unfamiliar for his label mate Patrick Watson. At the same time the early solo Sting comes to mind when a saxophone adds a jazz element to his music.

The music on Now is all over. The mix is full and does not let in any light nor room. It is everywhere and from somewhere in the middle Mac Cormack's voice stares us in the ear. A sound that he can't in any way reproduce when performing solo. That is of no concern of mine as I wallow myself in darkness listening to Now. What does surprise me, is that Now is his debut full length album. Before indeed were only EP's and what surprises me even more is that the singer-songwriter from Montreal took so long to deliver his debut. The fact that he needed this time is offset by the quality. Now is consistent, yet heavy like a monolith.

The record was recorded in his own home studio where he played most of the instruments himself. Dark synths mix with his guitars, bass and drums. The album indeed is a kaleidoscope of sounds and impressions. Mac Cormack shows very different sides of himself. From a string laden ballad, 'Sunday' where a hint of Talk Talk can be discerned, to the 80s doom of some of the earlier tracks on the album. Yet, also an only 2.15 lasting dark synthladen song like 'Passageway' comes by, over before I understood it to be the next song, when not listening with a 100% concentration that is.

It is 'To The End' that reminds me of his earlier work. The acoustic guitar strummed tightly in a 60s fashion. It is in the arrangement around the strumming and singing where Jesse Mac Cormack shows the world what he can achieve in 2019. I strongly doubt whether any of these songs will make it to Kairos as the idiosyncrasy that came with them has disappeared on Now. That time will tell. For me Jesse Mac Cormack shows his full potential to the world. In that sense he competes immediately with my favourite Patrick Watson album, 'Love Song For Robots'. Where darkness meets pop and great melodies, in singing and music. In that sense Now contains hit songs if hitparades were not filled with songs that if not yet, soon will be made by AI. Sterile affairs, where Now contains songs that are infectuous if not contagious, not just musically but bacteriological as well. This music was dredged up from depths unfathomable with no idea what might come up too. Jesse Mac Cormack has taken some risks here but has come out on top of whatever demons and monsters he's faced in the process.

Summing up, Now is not a nice album. Far from even. Nor is it beautiful or pleasing. It is an album that shows you different sides to creating and playing music, direct and without hesitation. Each individual song is interesting in its own right and satisfying to listen to, even though some are extremely painful. Now shows that darkness can be beautiful.

To end on a lighter note, I notice from the cover art that nearly 30 years after my visit still no one plays golf on this golf course near Death Valley. Luckily some things don't change.

You can buy Now here: