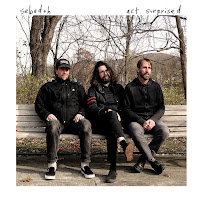 Around 1990 when friends pointed me to Dinosaur Jr. all I heard was a bunch of guitar noise and a distinct lack of melodies. Although I certainly like a few of the comeback albums of the band, I never bothered to search back in time. Why is this relevant? Because of this association I never heard anything by Sebadoh as far as I'm aware. That changed with Act Surprised.

There's no need to act, because I am genuinely surprised in a pleasant way by Sebadoh's latest effort. It has faint traces of the albums Buffalo Tom broke with in the 90s in this country (and I'm firmly aware as to which band may have been the originator at the time).

On Act Surprised I hear a band that is not afraid to rock out. In the murkiest of ways. Dark guitars and a dark, slightly or more distorted bass that is mixed all over the place to fill up the sound, leaving everything left there for the loud and busy drummer to fill. This certainly is not a clear sounding album. Although there are several guitar overdubs, this space needs filling to create a full power impression.

Sebadoh started in the late 80s while Lou Barlow played bass in Dinosaur Jr. Recording songs that he could not get placed in his principal band. After being kicked out of the band by J. Mascis Barlow started to make Sebadoh, apparently a nonsensical word, more important throughout the 90s. After a hiatus of about a decade the band released a new record in 2013. Six years later there is another one, the 9th full length in total. And, Barlow plays in Dinosaur Jr. again for years now.

In this new album a lot of the music that defined the early 90s come together. Some grunge, some of the Boston scene and lo-fi. Only Guns 'N' Roses is missing here. The result of this mix is a blend of DIY sound, some darkness and despondency and strong melodies, all based on loudly and subtly played guitars on a bed of solid drums. Like then, I warmed only slowly to this new sound from late summer 1991 onwards, I am conquered by the song by Act Surprised. With one major difference, over the years I have become a fan of enthusiastic guitar bands like Sebadoh is on this album. Much more so than in 1991.

There's always a big ado about the Barlow and the Lowenstein penned songs. I can't hear it. What I'm hearing on Act Surprised is a strong set of rock songs, with some inventive riffs or short melodies on the guitar. The singing in general is more enthusiastic than really good. It fits the music and the level of recording quality. As I said its murky in Sebadoh land and I like it on this record. More in general, there's hope for us all when 50somethings can come up with an enthusiastic rock records like this.

You can buy Act Surprised here: