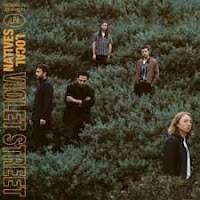 I had Local Natives filed in the Vampire Weekend department of my mind. Basically that is the file where once Talking Heads and other bands making "difficult" music around 1980 were filed into. So when the cd dropped on my doormat, it wasn't the first thing I put on that day. Things got worse when a one day later I found a pink post it attached to the cover reading: "Far too busy, not melodic enough. Don't play during diner!". So that was filed once more. Curiously enough, the post it made curious. And lo and behold I sort of fell for Violent Street.

The music on Violent Street is the stuff fairy tales are made of. I will not go so far that this music is make believe, far from it. The extremely high vocals seem to float over the music. Like a magic, coloured, star-sprinkled wave hovering in the air. It somehow outdoes all the music underneath it. Music that is dense, a little brooding and not necessarily very melodic. This fact makes the parts that are or to phrase it better, where the melodies are allowed to escape the density, stand out the more. That melody can come from any instrument capable of melodies. So count bottles in.

The references that come to my mind while listening to Violet Street are many. Some of them just won't come to me. U.K. band Foals definitely is one. Canada based Patrick Watson certainly a second. Both bands that are able to find that balance between alternative rock and ballads. Local Natives does just that. Even within songs tempos are changed radically, adding to the magic and different atmospheres. It makes Violent Street a totally unpredictable album. It is not that anything goes, but there certainly are no rules coming to making music within this band it seems.

Going into its second decade as a recording band, Local Natives releases its fourth album. That is not a prolific output. The Beatles were all said and done easily in less time. On the other end I can imagine that creating a record like this really does take time. I'm sure so many ideas were tried out, discarded, picked up from the floor in a different only to be discarded again. The result though is an album that is vociferous in several ways. Fairy tale music and all. There's no holding back. It is screaming out every single note: here I am, listen to me. And that is exactly my advice to you, dear reader, to start doing.