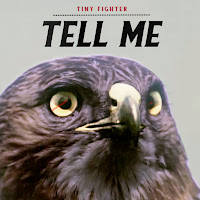 Today three singles get some attention. All three special in their own right. Tell Me is the third one.

Another release in the maxi single format is Tell Me by Tiny Fighter. It is about 20 years and a while ago that Veruca Salt entered my life and ever since I have a warm feeling for a real yet solid female voice in a stark but melodic rock setting. As I remember from an interview with Veruca Salt, its producer Bob Rock kept pushing the duo for another melody within the melody. The result being the band never released a better album again.

Tiny Fighter knows how to reach these sorts of levels as well. All the three songs blend a rock approach with a pop feel. A tightness that allows singer Therese Karlsson to go every which way she can take the song melodically. The result being two fabulous rock songs and a sensitive ballad.

Tiny Fighter is a Stockholm based Swedish - Australian duo that progressed into a full fledged six piece band. After releasing several singles it is time for a maxi single and it totally convinces from the first to the last note. Karlsson has a voice that mixes rock bitch with ultimate innocence without blinking an eye, while the band knows when to rock and when to roll.

'Tell Me' has a truly fun indie rock feel. Just listen to the beautiful chorus where Therese Karlsson shows the world two totally different voices. The dreamy, innocent harmonies make this a gem of a pop song. The guitars may rock out ever louder beneath her voice, it is her innocence that wins out. A short, fiery solo gives the song a winning point. Were this Sweden's participant in the European Songcontest my douze points were in the bag.

'Where Are You Now' is slightly more direct. Where a band like Hater, also from Sweden, remains more one dimensional because of the limited voice of its singer, Tiny Fighter shines the brighter because of its singer, next to stronger melodies. Tiny Fighter manages to pick up a host of influences of the past 40 years in pop and blend them into beautiful new songs. Short and to the point without any excess bagage.

The final song, the ballad 'Katrina', is led on by a piano and a violin. A hint of classic U.K. folk enters the songs, some Fairport Convention/Sandy Denny. These little hints while the band remains itself. Another side to the band, but a clear token of what it is capable of beside indie rocking out. From Sandy Denny to Blondie and Veruca Salt, to keep that mix convincing a band has to be good. Tiny Fighter, on the basis of the three songs presented to me through Tell Me, is. I can't wait to hear more.

You can buy Tell Me here: