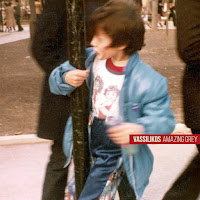 There are moments that I have the idea that Vassilikos originates in outer space and has never heard pop music before. After a mandatory period of listening to music of the last say 45 years he receives an assignment: make an album. Our imaginary alien goes to work, diligently and comes out of the studio with Amazing Grey. Somehow it it all there, Bee Gees disco, Fleetwood Mac's 'Tusk', the new romantics, pop, disco, new wave, rock guitars. You name it and you'll find elements of it in the songs. Worked in like it is a natural thing to do. And mind, I'm only writing about the opening song 'Anybody Lost?' here. Confused?, rightly so. You're copying what I felt right now being exposed to 'Anybody Lost?' for the first time.

The bass intro opening the second song, 'The Opposite Of Love', makes for a totally different mood and again a disco guitar comes in, a Giorgio Moroder little synth sound, 80s synths, a Tears for Fears melody, Erasure, George Michael and Spandau Ballet singing and a children choir, all under and over a fine pop melody. You can imagine that I had my fill after a few songs. This was not an album that I was going to review, no, not ever listen to again. I did anyway. All albums by Inner Ear Records were fine so far, so I decided to give it another chance.

Amazing Grey is the kind of album that grows on you. Give it a chance and you will find that a lot of interesting things are going on on this album. Vassilikos is able to find a lot of sounds and mix them in ways that may be confusing at first hearing, yet turn out fine in the end.

Vassilikos is a big artist in his home country, Greece. Living in London, he is ready to release his third solo album. With his band Raining Pleasure he has scored several hits in the past. All of this went me by here in the north-west of Europe, like most Dutch bands never reach Greece, I suppose. Who's heard of Kensington or Anouk there? Where for his first two solo albums Vassilikos looked at a more distant past and to more traditional Greek music, on Amazing Grey he looks closer by, the late 70s and the 80s, where the Wham sort of disco certainly must have had him charmed.

Like I wrote, each individual song takes you on a trip. For those having lived through the era there are so many aha moments. No, I don't like every song as much. In that it certainly resembles the 80s for me. What Vassilikos manages to do successfully is not just emulate the 80s, he stamps on his own frivolous take on the decade. It is that element that makes me continue to listen after I gave the album a second chance.

Music from Greece? It seems to have become a normal feature on these pages. Who would have thought?

You can buy Amazing Grey here: