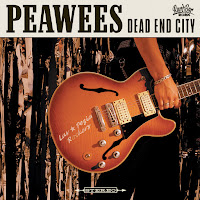 Today three albums come by. The first one is from Italy by way of the U.S. of A..

The Peawees debuted on these pages about a year ago with its latest album 'Moving Targets', that exquisite pop-punk-garage-rock'n'roll explosion. Its U.S. record label goes full circle by releasing the La Spezia, Italy outfit's first album 'Dead End City'. I rest my case. The Peawees is an extreme one trick pony rock monster. But who cares if the trick is this good? It baffles me every single song. Like that piece of candy we called a "toverbal" (ball of magic), that kept changing colours in your mouth, so it had to be taken out every few seconds to check; stickiness and all. Like that toverbal, The Peawees keeps changing songs, while the ball itself remains the firm basis. Racing through the colours/sounds. After a half an hour it is all gone, only to shout out: "Play it again, Sam!".

There's no need to write a lot more. The energy of Dead End City is telling all. The joy of playing this style of music simply jumps from the MP3s in this instance. There's one little thing to add. By presenting a few covers on the album, 'Runaround Sue' and 'Proud Mary', The Peawees shows the world what it was before it started to write its own songs: a band that played cover songs from an era long before the members were born. Injecting them with a little garage rock power and stage them frantically. La Spezia and surroundings must have had great fun with these lads around and probably still has.

But when all's been said and done, these three words would have sufficed above all others: rock and roll.