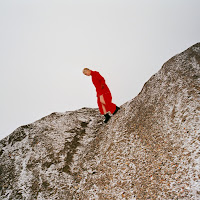 Today we have three records again. The first one is released tomorrow and rather confuses our Wo. Let's start in Wales.

Let me start by saying that I think Reward is an interesting album and in some parts even good album. Yet, I find myself unable to warm to it in any way. How come? Before I continue I refer to my first sentence to make you understand that this is not about negativity. Otherwise I would not have taken the effort to gather my thoughts and try to find a route into my confusion caused by Reward.

So, how come? In nearly every song I feel alienated. As if Cate le Bon makes every effort to either confuse me or to drive me away. There are so many estranging effects in the songs, that make it hard for me to keep listening. An intro can be quite nice, like in 'Daylight Matters', only to be sliced apart once the song properly begins. A duo like Carol Cleveland Sings is able to do the same, yet keep up the flowing melody.

Another part is in Cate le Bon's voice, although I find that I can live with it in the end. Something I can get used to. This may just go for the whole album. Perhaps I have to get used to it more by investing time in it. Listening to so many records, that could prove a challenge if I'm not won over fast.

Listening to Reward again, I do start to notice little ways in. The production is modest, with only elementary effects. Take the eastern, Chinese music effects in 'Home To You', reminding me slightly of 'China Girl' and the soundtrack of 'Merry Christmas, Mr. Lawrence'. Like a solitary flower in the desert the Eastern melody comes forward in true glory. Having mentioned two Bowie references already, 'Blackstar' comes to my mind a few times as well. The poor men's version and I mean this in a positive way as Reward is at times pleasantly empty. It has the same daring experimentation with sounds, rhythms and instruments like Bowie's final album.

'Mother's Mother's Magazines' is one of the songs that has a tendency to make me feel jittery. What does it want from me? Everything seems to be at work to drive me out. Despite the fact that I discern some Zappaesque musical jokes at work here, the song simply gets on my nerves.

Reward to me is a strange album and yet, and yet. It also has its moments that are very much worth while listening to. I let you decide for yourself from here on (something you need to do always, of course).

You can buy Reward here: