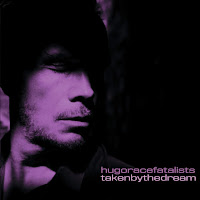 Listening to 'Phenomenon' I can't help getting all sorts of names in my head of artists who have come and some have already gone before. The low talk-sing style immediately brings Leonard Cohen to mind, like the way Hugo Race's voice resonates reminds me of The Walkabouts' Chris Eckman. When later on in the album there are a few duets with Lisa Crawley the light and the dark mix perfectly like the tandem Eckman - Torgerson used to do.

In general reading my reviews of Distance, Light & Sky or more recently The Strange and now Taken By The Dream I can only derive at one conclusion: This worlds needs The Walkabouts. Race and Eckman have worked together in Dirtmusic, so the connotation is not that strange.

Hugo Race used to be a Bad Seed, in 1983 and 1984. I encountered him for the first time last year in his collaboration with Michelangelo Russo where they brought John Lee Hooker's songs into the 21st century. Taken By The Dream in not as dark and brooding as that album, it certainly can be called folk noir. The songs are mostly kept small. Mostly because of the serrated way of singing by Race and the playing. In some songs there is not an instrument that rises to prominence. A shroud of music. In others individual instruments do escape the dark background, e.g. in 'Altered States'. Somehow the song sounds like there's a host of players creating a wall of background sounds from which the other instruments escape occasionally, some permanently. This example certainly is a Nick Cave influenced song, but also J.J. Cale, without his sprightly step, his bounce.

Now not even Hugo Race will not claim that he is an exceptional singer, probably even agree that he is not the best composer on Earth. For that his voice is too flat and his songs do not sizzle with bright pop elements or surprising turns that make a listener prick up his ears immediately. Never forgetting the tune again; even after a single listen. That however is not what makes music good in an exclusive way. What can be added is atmosphere, tension, colouring, instrumental prowess, etc. Taken By The Dream has several of these elements in presence.

The album takes care of some intense listening, quality time with music. With a headset on or when played loud enough all the richness hidden in the songs come forward and makes the songs on the album sparkle. A sparkle that certainly is not there at a first glance. The investment of your time in this album is a prerequisite to be able to enjoy it. Invest and you will be rewarded, if folk noir is your thing of course. It is mine in the right doses and at the right moment.

You can buy Taken By The Dream here: