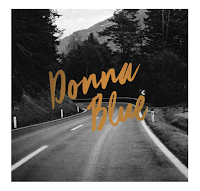 Today three singles get some attention. All three special in their own right. Donna Blue is the first one.

Donna Blue releases a new maxi single, as the three song singles were called when I was young. Often they were used to bring together a few hits of the past in one single and thus market them again. Joe Cocker, Spencer Davies Group, Procol Harum all scored hits a second time this way around 1971-72.

Donna Blue uses this old fashioned art form to release already digitally released singles physically on a 45 RPM single. And welcome it is, as a single is a (musical) art form in itself.

In style Donna Blue moves between travelling the U.S. highways, David Lynch hitchhiking in the backseat, French pop of the 60s, yè yè, and U.S. pop of the pre The Beatles era. Musically Donna Blue is a total anachronism, despite the fact the band never could have sounded as it does now back then. The reverb is near total, creating an atmosphere of space and time. Something someone needs to like, as nothing is direct, always shrouded. In 2018 I have found that after a hesitating start I am totally vulnerable to this specific mood and have fallen for Donna Blue's charms. Having see the band live late last year settled it for me.

That leaves one truly new song, 'Arlene's'. It takes the music of Donna Blue into another avenue of  the past. Bart van Dalen explores a light rockabilly sound on his guitar, mixed with the dark guitar sounds of Link Wray. 'Arlene's ' is also longer than the other songs, perhaps even twice as long clocking 4 and a half minute. The extra time is used to create some tension in the song by way of a guitar solo and stroked intermezzo's hitting the snares slowly from high to low. All in Donna Blue style of course. With a bare essence in drums and bass with only a tambourine added for atmosphere, Donna Blue creates a maximum effect with bare necessities only. Another oh so nice addition to the Donna Blue oeuvre which is growing slowly but steadily.

You can buy 'Donna Blue' here: