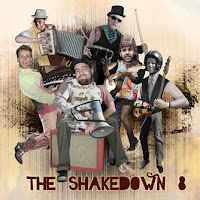 You can listen to the EP here.

The début EP of The Shakedown 8 shows a couple of things to the world. Let's go over them one by one, but not before I remember you of the gig I was at a few weeks back where I saw them do what they are very well at: Building a tremendous party on stage with an incredibly well structured set that with each new song takes the party one notch higher. Read more here.

Off course people, let's not kid ourselves, the ska-infused music The Shakedown 8 excels in stems from a long time ago. It's hey-day was even before the Doe Maar craze broke out in 1982. For just two years Madness, The Specials, The Selector, The Beat, Bad Manners were all over the charts, to disappear again. Is it a coincidence that this EP was made in the time that Madness and The Specials are playing for big crowds again, with Madness even having a great album under its belt? Probably not.

What I like about The Shakedown 8 is that the band obviously knows more than one trick. Although that all songs lean on the back beat, the listener is treated to a great rock guitar solo, a rock and roll style piano solo. Or an intro that also could take off into the soundtrack for MASH 2, before the guitar sets in that is. Some Zydeco? The band takes care of that as well.

The EP is special because of the different sounds that are allowed into the picture. An accordion can feature as a lead instrument as well as a guitar or organ. The piano does wonders to the sound. The singing may not be the strongest point of the band, but the raspy voice of Tak suits this music and when 'Big words' is sang home to great effect, there's nothing left to complain.

There are a few songs that stick out immediately on the five song EP. 'Let me in' is a great hit that a band like Rancid or, off course, The Clash, would not have minded to come up with. The already mentioned 'Big words' is a great song by any standard and 'No responsibility' is a great party song that gives everyone a hard time to stand still listening to it. 'Easily' has the exact same quality with the difference that the organ is even more prominent. That's four out of five!

What a joy at playing is portrayed by the band! That's another feature that shows through every pore of this EP. The Shakedown 8 truly like what it's doing. The band is proud of winning a The Specials contest in June. It can also be very proud of being The Shakedown 8. They have the best of several worlds within it. The way The Shakedown 8 is able to give a twist to its songs that make them stand out being its strongest feature.

Do I need to say more. I don't think so. If a band like Rilan & The Bombardiers can get airplay in 2012, then so should The Shakedown 8. Maybe it takes two good looking girls? Who knows. All kidding aside, this band deserves some support. These guys are talented at what they do, inventive and may be able to come up with a load of surprises in the future, given the chance.

You can order The Shakedown 8 EP and other goodies here