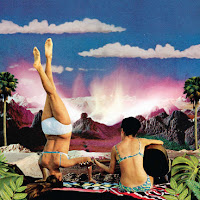 You can listen to Songs from Island fire here.

We're delving deep into pop here. Like pop when it was made in the sixties. Island fire offers up a soup of undercooled sixties singers, Nancy Sinatra pop, The Shangri-Las' melancholy, (Lily Allen on a good day) and some great songs as well. Gemma Ray did not just got stuck in the past, but offers her own talent in the blend too, while obviously some part of the production and arrangements could never have been made a little under 50 years ago.

It's not often that I'm writing a review on a singer that has not got an entry in Wikipedia. So all I found at first glances, was that she was born on Berlin, raised in the UK and is active as a singer since 2002. There's also a story that she was stuck on an airport after the Iceland volcano with the unpronounceable name erupted. This feat gave her the inspiration for parts of the album and the album title. Island fire it is, thanks to the Eyjafjallajökull.

A review of the content has to start with the voice of Gemma Ray. It's her voice that contributes largely to the mood of the record. She emulates a form of longing that draws your attention into the album, coolly seductive I'd say. Not unlike Cat Power, Lana del Rey, Norah Jones on her latest album 'Little kisses' and Mary Weiss. At the same time she's more girl than woman. The second feature is the sparse production. Low key bass, drums, guitar and keyboard are the basis of all. Small embellishments here and there. Far from a Wall of Sound production, despite that the name Phil Spector is mentioned here and there in association with Gemma Ray's music. Only in vibe, not in sound. Some songs could have been on Miles Kane and Alex Turner's The Last Shadow Puppets project as Island Fire also has a (deflated) The Walker Brothers vibe. Loads of echo and tremolo in there, with a voice of a slightly hoarse quality, but o so female.

Where most songs are sober, some are less so. The cascading effect of the music and singing in 'They all want a slice' is quiet charming and adds a special flavour to the album. As most songs pass by incredibly slow, it offers a moment of rest in busy times and invites one to really listen. Later in the day with a head set on, Island fire will draw you in to its world. At the same time the album works as music in the background, which is not always the case. There's enough going on to be able to divide attention between daily business and the music.

Gemma Ray surprised me. I had not expected to like the album on the basis of  reviews I'd read. And so curiosity once more won over mind. There's a lesson here, dear reader: Never listen to reviewers, no matter what they say. Let them, and thus me, be your guide, but no more than that.

You can order Island fire here