The soul of Spain. Spain 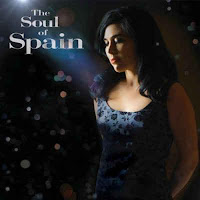 You can listen to 'Without a sound' here.

Impressive, fantastic, beautiful, lyrical, contemplative. Just a few words that come to mind while listening to The soul of Spain. Apparently there were previous albums by this band, but they passed me by. This one hasn't and I'm the wiser for it.

Spain is a band from Los Angeles around singer, bass player Joss Haden that released three albums between 1995 and 2001. Since 2007 the band performed sporadically in a totally new line up around Haden, which resulted in this new album.

The soul of Spain is the sort of album that deserves intensive listening. Just you and your head phone laying on the coach with your eyes closed. This is that kind of album. An album to unwind with, to build an intensive relationship with, an album to cherish. If you allow yourself the time you'll find Spain takes you on a musical adventure of immense beauty and inner rest. It all starts with the slow 'Only one' and the tempo even goes down in 'Without a sound' with its beautiful clear sounding acoustic guitar to which a piano is added further on. All to great effect in the spacious mix of the instruments.

The electrically charged 'Miracle man' even comes as a bit of a shock towards the end of the album, but sits well as a change of mood before 'Falling' sets the mood right again. Strangely enough 'Miracle man' is not the only up tempo song, but I had forgotten all about that near the end of The soul of Spain. 'Because your love', dark, brooding and distorted shines out like a warning light in the dark, but flares up in its own beauty.

The soul of Spain is the ultimate form of un-hurry. Haden's voice almost has an hypnotic quality. Oddly enough his voice reminds me of Lou Reed, but without the intense rasp. Some songs have a The Velvet Underground quality. Mind the 'Candy says' or 'Sunday morning' variant that is. (I know, both not sung by Lou Reed.). 'All I can give' for example could have been part of the third album of The Velvet Underground without any one noticing. There is a difference. 'All I can give' is more orchestrated and sweetly honed. Also fans of Teenage Fanclub and the solo work of Keith Caputo can find their own on this album. Another album I associate The soul of Spain with is Polichinelle of The Prayer Boat, which has the same sort of ethereal beauty. The last band I like to refer to is Sophia, but this album is much better than anything this band has offered so far, as Sophia sounds harsher.

My impression is that the songs on this album were crafted line by line, note for note, taking a long time before they had the shape we are presented with today. Not unlike Steely Dan, although musically the bands are quite apart. Listen to 'Walked on the water' in the way one single note from an instrument is added to the complete picture, the way the layered violins sound, to understand what I mean. Adding and subtracting is what seems to have taken place here. All to great effect.

Whether the soul of Spain was captured on The soul of Spain, I can't tell. Neither if the lady on the cover, captured in a spotlight in total darkness was the inspiration for all this beauty. What I do know is that this is an album that has to be checked out by all that like laid back and beautifully crafted pop songs.


You can order The soul of Spain here