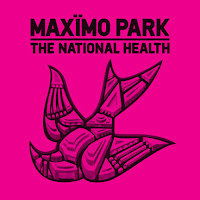 You can listen to The national health here.

NME opens its review of the latest issue by Newcastle's finest as "a return to form". I can only agree. In the short version I'd say that the songs on The national health are exciting like most songs on 'A certain trigger' and 'Our earthly pleasures'. With a slightly darker layer wrapped over them, which opens avenues for the band to explore in the years to come.

Coming up with a single like 'Apply some pressure' so early on in your career, means that the band is stuck for ever with a signature song that every song following it is compared to and will in most cases not come up trumps. This sounds as negative, the other side to this medal is that hardly any other band writes a song like this ever in their whole career. 'Apply some pressure' is one of the songs of the zeroes, period.

When 'Quicken the heart' came out in 2008, I simply just did not like their third effort and wondered if Maxïmo Park would ever come up with a good album again. The solo efforts of Duncan Lloyd and Paul Smith followed and then, a day after I expressed to a friend that I gave up on a new album, The national health was released. And yes, it's good. Not just good, but a very strong effort that captures everything that I liked about the band in the mid-zeroes and at the Tivoli show in the spring of 2008.

The national health offers several energy-charged songs that compare favourably to all my favourite Maxïmo Park tracks (but one). The title song is a staple to that. With a great, very short guitar solo, perhaps a guitar eruption is a better word, great singing by Paul Smith, but also great harmonising with counter melodies. 'Hips and lips' has a Soft Cell influence through the keyboards as well as other 80s acts. If the tempo goes down or the force of the Maxïmo storms lies down just a little, out come songs like 'The undercurrents' with loads of beauty in melody and playing, in which the keyboards of Lukas Wooller play a more prominent role, with a beautiful, clear sounding guitar motive by Duncan Lloyd to boot.

A four year rest is a long time for a band and especially when the last album was not comparing to the previous two. However, the rest seems to have done the band more than good. The national health in general may not be as good as it used to be, the album by Maxïmo Park is a triumph. A staple of positive energy that ought to get everyone out of a crisis. Paul Smith and his band mates have come up with an album that undoubtedly is one of the best of 2012 so far. Should you have any doubts, set them aside and you'll be rewarded. And please look beyond the absolutely horrendous cover.


You can order The national health here