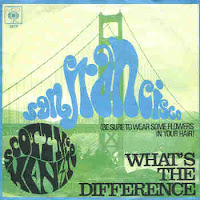 You can listen to 'San Francisco' here or

Philip Wallach Blondheim died on 18 August and to my big surprise over one minute was spent on the national 8 o'clock news on this fact. There was absolutely no information on Blondheim himself, just pictures of him in some sort of dress singing his one and only, but world wide top 10 if not number one, hit 'San Francisco (be sure to wear some flowers in your hair)' and pictures from a movie showing hippies from the summer of love. (My best guess is from the 'Monterey festival' film.) With all respect, but there plainly was no news of any sort if a one hit wonder gets so much exposure on the main news broadcast of the public, state sponsored channels.

Scott McKenzie was famous for just one song. He did not even write or play on it. John Phillips, a childhood friend of McKenzie by the way, wrote the song for him, played guitar and co-produced the record. In all but his own voice, he piggy-backed on the fame of Phillips and The Mamas & the Papas. The song that has made McKenzie world famous was perfectly timed, in sync with the times and embraced as the song of hippiedom and the summer of love of 1967. Despite all the incredibly good music made that year by other San Franciscan and Californian bands, this soft spoken, clean and neat song, became the hit single everyone could live with. Perhaps even some parents in 1967. It also reached number one in The Netherlands and is a song that is around for as long as I can remember.

Listening back to the song it is quite easy to recognise its hit potential. An instantly singable melody, the slightly longing voice of McKenzie, but it's the driving rhythm of the bridge that gives the song its extra, as it is not just the sticky sweet melody of the rest of the song that convinces me as listener. San Francisco has a bitter sweet quality that makes it special. Almost as if it knows it wouldn't last. And the great orchestra bells that grace the song all along are a special feature. San Francisco is the perfect blend of folk and pop. Yes, just like Phillips' own band.

Phillips and McKenzie went way back. They had recorded singles and albums for a few years before The Beatles blew away the folk revival in the U.S. McKenzie declined the offer to join The Mamas & the Papas and went solo. After San Francisco McKenzie only made two records, 'The voice of Scott McKenzie' and 'Stained glass window'. In the mid-eighties he joined The Mamas & the Papas touring band, but these are the only feats in musical career, which is surprisingly small. I'd expected heaps of unnoticed albums to this day.

The conclusion must be made, that without John Phillips, who maybe did not even get one second of attention in news programs when he died, we would never have heard of Scott McKenzie, let alone learn of his demise on radio and tv. Forever he will be associated with the summer of love and remembered for that soft spoken, but fairly beautiful song that sold over seven million copies world wide and is on every single sixties compilation and will be forever: San Francisco. Yes, a one hit wonder, but a very special one as a whole, albeit very short, era in youth culture is associated with Scott McKenzie and his hit single of 1967.

Some references I found at the Wikipedia entry on Scott McKenzie.