What kind of world. Brendan Benson 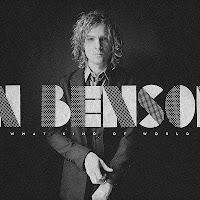 You can listen to 'What kind of world' live here.

For most people Brendan Benson is known because he teamed up with Jack White in The Raconteurs. After two more than just nice albums, 'Broken boy soldier' and 'Consolers of the lonely', the individual members went back to what they were doing before that or new projects for Jack. With What kind of world Benson made an album that ought push him up into at least Euro League if not the Champions League of albums for 2012. A plate of great pop rock songs is served up with influences of at least the last 35 years of pop music present. Even the Little River Band comes by in 'Light of day' in the great singing and matching the best of Crowded House with ease. Pure great pop with a sharp rock edge here and there.

The differences with 'Blunderbuss' Jack White's first solo album, couldn't be greater. (Read the review here.) The combination of Benson and White is a somewhat strange one at first sight. It isn't if we consider the great melodies Jack White is able to come up with under or over the blues, antics and noisy eruptions. Benson is more straight forward and aims for the perfect pop song in the best tradition since Lennon/McCartney. So where White turns towards blues and soul, Benson turns to pop, rock and a little undertone of new wave. The combination of the two worked well, while they both came up with a great solo album in 2012.

What kind of world is Benson fifth solo outing. So far I liked 'Lapalco' (2002) the best, but I think this may change any day soon. What kind of world happens to be a very strong album, that truly takes the listener on a audio tour, through different moods, tempi, sounds and voices. Most songs are up tempo, some remind of The Cars of 'My best friend's girlfriend' and Fischer-Z in the 'Marliese' phase. Just as easily The Kinks come to mind in its 'Low budget' period. Benson is able to come up with strong songs that rock mildly hard.

'No one else but you' takes the album in a totally different direction. Billy Joel? Yes, until we get to the chorus where the song erupts in a totally fun way with horns and a-ha-a-ha background vocals that match the horns. Where the album at first appears to nosedive, in my humble opinion, it's taken a step upwards instead. The rough sounding guitars in 'Come on' are in stark contrast to the previous song, while the final effort, 'On the fence', shows that living in Nashville, Tennessee, leaves it traces on every one. A honky tonk piano and a pop country flavour. An end that is forgiven, as the melody of the song is a true winner.

All in all What kind of world mostly colours nicely within the lines of pop music. As long as this happens with the quality Brendan Benson offers on his latest effort, he can colour this way forever as far as I'm concerned.  The album seems to offer the best Brendan Benson has got to offer and this is a lot.


You can order What kind of world here