See you in hell. The Resignators 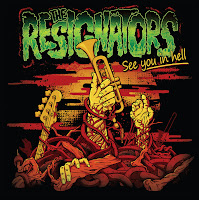 You can listen to See you in hell here.

From the very first a-capella sung notes on See you in hell, Melbourne, Victoria, Australia band The Resignators makes it clear without a single doubt where this album is going to go: major party time! The well-sung intro is the start of an album that never wavers for a minute from a punky ska kind of music that is made to make someone move. When younger in the moshpit, when older just a little more in the back. The Resignators are at the top of their game on See you in hell. Songs are simply spat out at tremendous pace. Within 30 minutes the fun is all over, leaving the listener breathless, but all wound-up to start the album all over again and again. See you in hell has a strong, addictive quality to it.

The comic book like zombie album cover doesn't do the band right, as the quality of the songs on offer go way beyond the comic. Unless it's meant to show that no person can remain still, whether, standing, sitting or lying down (six feet under the daisies) of course. In that case ....

See you in hell is great fun to listen to. It charges the listener with energy and a good feeling all over. All songs have a great rhythmic bed in which the rest of the band can do its thing and excel as they have nothing to worry about or look back at what's happening. No matter that drummer Ben Sharp may barely reach over his drumkit, he's a phenomenal drummer who keeps a tight rhythm despite all other things that he puts into his drumming. He's all over the place. Together with bass player Naf he's the foundation of The Resignators.

Whether the guitar or keyboard fatten the upbeat or weave out into a solo outing, the songs pump on, are propelled forward. Over all this comes the brass section which add greatly to the fun. Unlike Larry and his Flask, who use copper sporadically, The Resignators have made it a staple of their sound, not unlike the 1980 UK ska bands. As a capstone there are great melodies sang on See you in hell as well. Perfect to sing along to. 'Shape I'm in' is the best of all worlds. The song breaths, rocks hard, fantastic lead lines by the brass section, a hard-rockin' guitar solo and a refrain that can only be shouted along to. All comes together in this song. Like Dropkick Murphies at their best.

The fun ends with 'I farking love you (A Frankston love song)', another farking great song. There's just one thing to do while listen to it: move around in a dancing like way and there's a second thing too: you may find you have an urge to sing along. See you in hell is a dangerous album for those that do not like to move nor sing. And an album to travel to hell and back for. No need to stay there, it's enjoyable under all circumstances and in all resorts. "I farking like it (An original Wo. statement".)

You can order See you in hell here