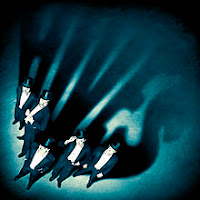 You can listen to 'Go right ahead' here.

Making albums is not something that seems to come easy to The Hives. Since the band's breakthrough album 'Veni, vici, vicious' in the year 2000, Lex Hives is only its third. 'Tyrannosaurus Hives' (2004) is said to have been rejected by the record label and the end result after that was an album that did not sparkle in any way. It sounded forced and aimed at finding a repeater of the success formula and not succeeding. 'Black and white' of 2008 was already better and on Lex Hives the band seems to have found its stead again.

You won't hear me say that Lex Hives is a top album, nor that The Hives are a top band. What the band does offer is energised songs, excitement and an occasional song that is a lot more than average. Lex Hives offers up more of these songs than their two previous efforts and that is good news for the fans. Live it will most likely be even more fun if the band is able to translate energy into a charged performance.

For those who haven't heard a song by the band before, the band has a punk back ground, but slowly switched to more punkrock fuelled songs. In other words: not just up tempo, angry songs, as they clearly try to find the melody hidden behind the chords. With 'Howlin' Pelle Almqvist as a front man who is able to howl, scream and sing. He clearly knows how to attract attention to himself. Mixed right up front and in the middle, 'Howlin' Pelle shows to the world: I'm the singer. As such he is one of the important features of the band. Inescapable. My favourite line of Almqvist of this album: "My patrolling days are over and I ain't shot somebody since". Well thought up, especially listening to the rest of the song.

On Lex Hives The Hives present themselves in a diverse way. Not everything is straight up and down punk (rock). 'These spectacles reveal the nostalgics' is one of the extremes on the hard rocking side, while 'Without the money' is the complete opposite, as it is a very small and silent song. The band gets away easily with both sides. Obviously the up-tempo songs have the upper hand, but the fact that the band is able to explore new ways in successful ways, opens roads for them to travel in the future.

To me Lex Hives is an album that I'll enjoy in small portions. The whole album is a bit much for me, but most songs sit on my good side, so welcome back The Hives!


You can order Lex Hives here