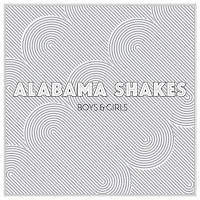 You can listen to 'Hold on' here.

So, am I finally up to write a review on this album? Apparently. Earlier this year a lot of people were writing or saying what a tremendously good, even fantastic album Boys & girls is. What a great talent the band shows: The saviours of rock soul. And here I was not getting it. Even after all these months I still do not think this in an extraordinary album. Boys & girls is good first effort by a new band. Alabama Shakes holds a few cards up its sleeves that makes it stick out from other bands. That is something which is not common in 2012, where most music comes from pre fab music shows where audience in the studio and at home only want to hear what they already know, sang by a pretty face. This is everything Alabama Shakes is not.

The first song I heard, probably like most people, is the single 'Hold on', that got some fair airplay on Dutch radio. Not exactly your everyday song. The laid back guitar lines and rhythm are something different. The album also contains these clear guitar leads and riffing. The rough sounding voice of Brittany Howard takes me back to sixties singers like Aretha Franklin, Carla Thomas and other soul singers. The music does so in part also, but not to soul music. There are distinct rock and pop sounds mixed into the soul and even some gospel. A bit like the Fine Young Cannibals did on their first singles, like 'Blue'. Although Alabama Shakes is a lot more unpolished than Roland Gift c.s. ever were. Some songs are more into soul, e.g., 'You ain't alone', which could have been sung by Otis Redding or Wilson Pickett, with some horns added. Brittany Howard is recorded in an authentic way for this song, distant and a bit metallic sounding.

One of the things I really like on Boys & girls is the way the male chorus in 'I found you' sounds like it's recorded in the bathroom around the corner, with the mike before that corner. It took me a while to get used to the voice of Howard, which sounds way beyond her years. That's behind me, as it truly belongs to the sound of the band, which is also rough and edgy. The interaction between organ and/or piano with the guitar is another item that attracted me further to this album. The muffled guitar tones, clear and prominently mixed, are another trademark of Alabama Shakes. Boys & girls holds some real ballads and strong soul rockers like 'Be mine', an almost Janis Joplin outing. Howard's voice is not that strong though. Both sides to the band are convincing and well balanced, although I prefer the bit faster numbers myself more. All in all enough to make me play this album regularly.

As I said, Alabama Shakes are not the saviours of rock and roll, whether it needs saving or not. Alabama Shakes have come up with a good début album, that holds a promise for the future, if the band is allowed to develop the way an indie band needs to develop: by playing a lot, writing songs all the time and releasing albums at a steady pace. This would allow the band to get an own voice and identity, beyond their sixties heroes. If that happens Alabama Shakes will have a true future in tis own right. However, should we have to wait for three years for album number 2, I do not have much hope. Let's wait and see.


You can order Boys & girls here