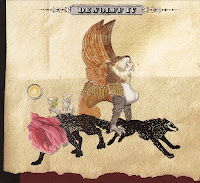 You can listen to 'Voodoo mademoiselle' here.

Young boys grow up fast. In just a few years teenage DeWolff grew from a wannabe seventies hardrock band into a completely convincing emulation of the real thing. On the fourth album the, now young, men have produced an album to be truly proud of. If anything they managed to come up with an album that is as diverse as a Led Zeppelin record in its best days. With songs that are hardly beyond in quality to boot.

Only five years ago Robin Piso (organ, vocals, bass) and the brothers Luca (drums) and Pablo van der Poel (guitar, vocals) started DeWolff and at present they are already one EP, four studio albums and one live album/book down their road. The non-traditional line up of the band, as a bass player is mostly missing, is turned into an asset by the band. As they delve into the well of inspiration offered by all rock bands from the 1967-1977 decade, the best is only good enough. In other words everything punk abhorred is fully embraced by the band. And still there definitely is a punk flavour to the more up-tempo songs on DeWolff IV. They are wild and exciting. While in the somewhat slower songs like 'Black hole raga' there is room for experiment. Almost like the song title suggest, between Soundgarden and Ravi Shankar, where it not that the band takes off in a very trippy direction with all sorts of Mellotron like sounds. Most of the second half of the album dives deep into the hallucinogenic musical spheres of the late sixties with deep organs, wah-wah and fuzz manipulated guitar sounds, sound scapes and fuzzy singing. Has Timothy Leary reached the south of Limburg late 2011, early 2012? It more than looks like it. Whatever DeWolff found, LSD or old records, it has come up with a mix that is worth listening to.

From the hard-rocking start to the trippy ending, the band has my attention, although 'Astral awareness' is one step too far for me. 'Revolution #9' anyone? Luckily it doesn't last as long and DeWolff makes up for this lapse quick with the rocking 'Vicious times'. It's easy to deliver critique and state that everything on DeWollf IV has been done before (and better!). It would be selling these guys short by the mile. This album brings together the best this music has to offer and brings new music of abundant quality in the idiom to enjoy as well. Sounds like the best of both worlds to me.


You can order DeWollf IV here