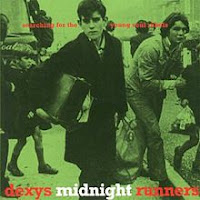 You can listen to 'Geno' here

or 'There there my dear here.

For years this album was my favourite of all time, till I stopped caring about ranking and just enjoyed music. At present it is 32 years old and was like a sort of religion to me for years. I decided to write about this album now that Kevin Rowland has released an album under the name Dexys that is so hard to listen to, that I can't get myself to write a letter about at this stage in time. How much does a person have to hurt himself on a record?

When legendary Hilversum 3 dj Frits Spits made 'Geno' his personal tip of the week somewhere in 1980 in his daily program from 18 - 19.00 hours called 'Avondspits' (evening rush hour) my interest was there straight away. I just had to know more. This was at a time that soul music was something that wasn't played any more. Aretha Franklin's comeback was through the Nutricia add on chocolate milk with 'Think' somewhere in the 80ties. (And the Blues Brothers who should've been called "Soul Brothers".) Soul was something of a distant past in 1980 and here were these English snotty guys wanting to teach the world a lesson on music. I just had to know more. When Searching for the young soul rebels was released I took the LP home and played it until the vinyl was grey and worn out.

Looking back on the album, now of course on CD and MP3, I'll admit that it is full of pretence and an over-estimation of proficiency, but what I still hear is deeply felt emotion. My ex-colleague Lourens, a classically trained trombonist, reviewed the album for WoNo Magazine some years back and simply said: "These guys can't play". Perhaps not, but does it matter if what they offer most likely is their soul. From the slurring voice of Kevin Rowland, to the all vibrant horn section, Searching for the young soul rebels is alive and kicking.

The album kicks off with an old-fashioned turning of a radio dial, static and flashes of music on radio stations and the message to burn the thing down. There's nothing worth while hearing on it. (Deep Purple, The Sexpistols, The Specials.) A clear message, not unlike in 'The Commitments' movie. And then the horns kick in. 'Burn it down' went straight into my heart. I even started reading some of the authors mentioned in the song, that Rowland accuses those sang to, not to have heard of. The horns even get better in 'Tell me when my light turns green'. There wasn't anything I'd heard like it and it went straight to my heart and soul. The intro to 'Couldn't help it if I tried' can still bring tears to my eyes as it is beyond the most desolate form of intensely lonely beauty.

Searching for the young soul rebels is all about a longing for what was and what is to come. Even the instrumental 'The teams that meet in Caffs' is full of it. It captures two moods: sad as well as hopeful and forward searching. Just like the hitsingle 'Geno' is about recapturing the past (of Geno Washington's Ram Jam Band) in Dexys Midnight Runners. The single of old is still so very alive. It's rhythm. it's posture and sense of urgency. More a statement than a song and because of that a great song.

'Seven days too long' was always the song I liked less and that has changed over the years. The optimistically fast paced song with the longing for the return of a seven days absent loved one is just a very fun song. And then the first notes of the already mentioned song kicks in, with the same effect as ever. It just hits me and makes me feel intensely sad. It plays a chord in my soul where everyone I've lost over the years seems to have gathered. Luckily the up-tempo 'Thankfully not living in Yorkshire it doesn't apply' takes me out of this mood and prepares me for the grand finale of 'Keep it', the poem 'Love part one' and the second single 'There there my dear'. Two great songs and a poem, yes on a record.

What I love about Searching for the young soul rebels (still) is the way that the horns play together in the melody and harmonics. The way the notes weave in and out of each other. The way they sparkle and make the songs stand out and shine. The Hammond organ that fills gaps so beautifully. The touch of rudimentary brilliance in harmonies sung by the band.

This version of Dexys Midnight Runners wasn't to have a long life. Two more singles, 'Keep it part 2' and the brilliant 'Soon', that I had to wait months for after ordering it. A change of record label. I saw them in the late spring in Brouwershaven in 1981. Then the band split up. Most went on to form the never to be heard from again The Bureau. The minority including Rowland and trombonist Jim Patterson went on in a new line up with violins on 'Liars A & E', breaking the way for the country alternative image on 'Too-rye-ay'. Which was to prove their commercial peak. Not their artistic peak though.

For Kevin Rowland his "winning days were thirty years ago" and he does show it on 'One day I'm going to sore', the new Dexys album. For the fans there is always Searching for the young soul rebels and 'Too-rye-ay', with 'Come on Eileen'. For those of you who have never heard Searching ...., you better check it out. It is one of the pearls of pop music. There's no other term that does right to this modern classic.


You can order Searching for the young soul rebels here