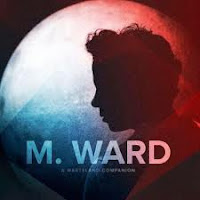 You can listen to 'Clean slate' here.

M. Ward, Matthew Steven, is not a name which is known to the bigger part of music lovers. In the mean time Ward has released eight albums since 1999, released records with actress Zooey Deschanel under the moniker She & Him, collaborated in Monsters of Folk and Tired Pony. Among others. In other words M. Ward is a very busy musician. With his eight solo album, he finally caught my attention full force. This, perhaps belated, attraction started with a small, very nice song called 'Clean slate', which opens A wasteland companion. A song in a very singer/songwriter vein, but not necessarily representative for the album.

The album is eclectic, as it goes off in all sorts of directions and music. At 38 Ward has found the freedom to release what he wants and record what he likes. With the help of many friends and colleagues. The tamer form of rock and roll (going country, Ricky Nelson like) of 'Sweetheart' and 'I get ideas' are great fun songs, with vocal duetting by Deschanel respectively Rachel Cox. In these songs there's a very good balance in lyrics and music. The sexually tensed 'I get ideas' because of "dancing dangerously close", is a fast-paced song driving the imaginary dancers onwards.

The country blues influenced title song is stopped in its tracks it seems and is taken in another direction. A soundscape with classical guitar playing, a muffled audience, hopefully pre-show) in the background. Like we will never know how the song ends. Surprise is allowed for on this record several times. Like in 'Me and my shadow'. It starts after the twist at the end of 'Primitive girl' as a song that could be on a The Hackensaw Boys' record, with a violin and banjo added that is, but then takes of in a rock direction with a fuzzed -up guitar and loud drums. 'Watch the show' has a harsh guitar kicking in, as if The Cure does a cameo.

On A wasteland companion M. Ward sails his album between singer-songerwriter in a Bright Eyes fashion ('There's a key' and 'Primitive girl') to more lightly fashioned pop songs, songs that go in a rock direction, but a song like 'Crawl after you' could have been sang by the the likes of Frank or Dino. Still the album is able to come over as a whole, but barely so. The voice is the common denominator that keeps all styles together. So for less broad minded listeners, it may be hard to take a shine to A wasteland companion. As I was caught by opener 'Clean slate', M. Ward had my attention, where he previously, for whatever reasons, did not manage to do so. Did you notice that I'm offering you that same chance? Take it and you won't be disappointed.


You can order A wasteland companion here