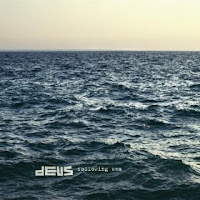 You can listen to 'Quatre mains' live here.

What is it about singing in French that a singer has the inclination to start using this Gauloise tainted voice? Tom Barman, singer and frontman of Antwerp based band dEUS sing-talks for the first time in French and has that characteristic sound to his voice, till he sings the chorus of 'Quatre mains', when his voice turns softer. A bit of a gimmick then? A successful one for sure.

Following sea starts off on a light footing, almost danceable, with a Pink Floyd like rhythm guitar in on corner, echoing 'Another brick in the wall, part 3'. Or so it seems. More on that later. 'Quatre mains' grabs the attention of the listener as different things happen at the same time. A trick that dEUS is good at. It's nearly 20 years ago that the band got attention in The Netherlands with their first album, 'Worst case scenario', as the leaders of the "Belpop" movement of, mostly Flemish, Belgian bands. A string of bands that has not stopped till this day. Following sea is the last in a line of albums of which 'The ideal crash' is still my favourite, with the intense and greatly built up 'Instant street' as absolute favourite.

After a few albums where the band didn't really tickle my fancy, 'Pocket revolution' and 'Vanishing point', Following sea grabs my attention again. There is an under current of tension put into the songs that drives the songs forward, like in 'One thing about waves'. Like there is something lurking about in the impenetrable dark. Despite the lighter tone of songs, that everyone points to, there are these delicious deep sounds hidden in the songs and melancholy lead notes on a keyboard in 'Hidden wounds' that carry me off to uncharted waters. A clear sign that Barman c.s. can write incredibly exciting songs without needing great effects, just by building the tension slowly.

Further on Following sea it is quiet clear that dEUS has shed most of its dangerous sides, but offers its fans beautiful melodies like 'The soft fall' instead. A kind of song that we have heard before from the band, but songs like this are part of "the good life". 'Crazy about you' starts of with a prickly riff, but turns into a love declaration with soft toned choruses, keyboards and a complex sounding acoustic guitar part. In this sense dEUS is exploring the softer side of the band and succeeding.

'Fire up the Google beast algorithm' is more experimental. A stream of consciousness kind of lyric, screaming and shouting in the background sounding like someone is in extreme agony and double tracking of the vocal in a desperate sounding voice. A nightmare put to song? As always towards the end a dEUS album is becoming a bit much for me. I enjoy dEUS best in small portions. That does not take away anything from my generally favourable opinion of the album, that I've played quite regularly in the past weeks.

The summer of 2012 may be turning towards its final stretch, listening to Following sea may keep your summer feeling alive for just a while longer.

You can order Following sea here