Choice of weapon. The Cult 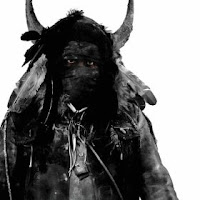 You can listen to 'Lucifer' here.

In 1986 we had two hits we could dance very hard to: 'She sells sanctuary' and 'Rain'. Man, I loved those singles and could play them all day (and night) long. The bright guitar riff of the former song was so good. But it may be years and years ago I heard it last. Nothing The Cult released since really caught my attention and finally I stopped noticing whether there were new songs or not. Apparently they still played and recorded, but not for me. And then something very surprising happened. At dinner time an mp3 disc was put into the player and I had no idea what was on it. It started with a Dutch singer who surprised me. After that album a hardrocking album started with a man with an ageing voice singing. Every song further into the album there was this little archivist in my mind trying to find the corresponding label. It stayed just beyond my grasp. Till I couldn't bare it any longer: WHAT IS THIS? I was truly, truly liking what I was hearing and wanted to know. That was only two days ago (at least when I started writing this review) and I'm playing Choice of weapon again and again.

Ian Astbury's voice hasn't aged well. It's ragged, blown, shot, but fits The Cult's music in 2012 like a glove. Not unlike Muddy Waters or John Lee Hooker at a later age.With this difference that there's lots more power streaming past his tainted vocal chords. Like Jim Morrison may have sounded like in older age, I think. So the correct replacement for Krieger-Manzarek anyway? On Choice of weapon the vocal melodies are better than any The Cult album I recall, making most songs distinct and fun to listen.

Billy Duffy's guitar playing is just superb on this album. Rocking hard with deep sounds and clear leads. Loads of melody and surprises. Quite frankly, Duffy is all over the place, taking the album to a different level. Where 1980ties The Cult albums tended, in my opinion, to be too uniform, Choice of weapon is all but. Power ballad 'Wilderness now' underscores this observation perfectly. With guitars up front and in the crookes and nannies of the mix.

Come to think of it, Choice of weapon may be the album Axl Rose has been working on to make for 14 odd years and failed to do. A song like 'Lucifer' brings reminiscences of Guns 'N' Roses to mind, with Slash like soloing, but who came first? This album rocks hard, but does not lose sight of the song for one moment. Even the bit dumb starting 'A pale horse' bursts out all shining in a great chorus and bridge.

Producers of Choice of Weapon are Chris Goss and Bob Rock. Need I say more. It's no surprise that this album rocks hard, has loads and loads of melody. Masters of Reality fans will hear just the right echoes to their fancy. Rock has proved that he can blend the best of two worlds into perfect sounds.

Of course, the lead guitar sound is a U.S. 1970 and 80 sound, but I'm not arguing that I'm listening to something new here. Just that The Cult has come up with a very pleasant album, that does right to its heritage and should be able to find new young fans as well. This is a very much alive album. (The deluxe version even with four great extra songs!) With a very potent guitarist and rhythm section and a singer that barely seems to be able to keep up, but does a great job just the same. And the weapon of choice is: (a) rock and (a) hard (one) too.

You can order Choice of weapon here