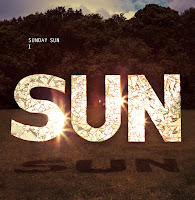 You can listen to 'Highly respected rebel' here.

Holy moly, is this a poppy record! On the day Sunday Sun played Giel Beelen's morning show on 3FM as "Serious talent", the band offered its first EP for free on its website. After downloading it, I sent a message to thank them and promised a review in return. If anything, I haven't regretted downloading the EP for even one second. 1 is as pleasant as last Sunday's summer sun. Perhaps even a little too warm, but so glad that it's finally there.

Sunday Sun is a new four piece band from Holland; each member with a legacy in Dutch pop music. Koen-Willem Toering (Woost)/guitar,vocals, Yoshi Breen (RubyQ)/guitar, keyboards, vocals, Wouter Rentema (GEM, Laura Jansen)/drums, vocals en Jan Teertstra (Wooden Saints, Laura Jansen)/bass, vocals. With four vocalists in the band harmonies can be built and this is exactly what the band excels in.

Sunday Sun knows its classics. It knows how to craft a great pop song and certainly knows about harmony. The five songs are simply soaked in Beatlesque and Beach Boys like melodies. Signature song Sunday Sun tells all. Sunshine all over the place, with not a cloud in sight, not one tiny hook that could scratch a leg or damage a summer dress anywhere around. 'Daisy' is not just in the band's 'Family tree'. My guess is that she's is going to be in a lot more, as a lot of people are not going to mind adopting her.

Of course the band is not as good as its examples, but then the two mentioned bands weren't as good as we know them now to be with their first singles. 'Love me do' wouldn't have made the cut for 1, as all songs are better. The individual voices can not compare to the Wilson brothers and friends, but hey, who can? It is obvious that good is good enough and the harmonies on offer are warm and spot on.

Other names that come to mind are Fountains of Wayne, Silver Sun but also Dutch contemporaries AlascA. They may even be able to, in time, step into the void Johan left. This just goes to show that Sunday Sun could be going places. With only very slight variations in the timbre of a song they take the listener into another realm. Now it's pop, but punk- or Britpop are just around the corner should they wish to experiment. 1 shows this already in a way, as all songs have a distinct flavour, from pure pop and beat music to rock edged pop and even a real 'Michelle' like ballad. It does bring the question to mind who Sunday Sun wants to be and what its own face is. Only time can tell, but yes, I'm definitely looking forward to EP 2 and 3, that are announced for the coming months. The first instalment simply begs for more.

You can order 1 here.