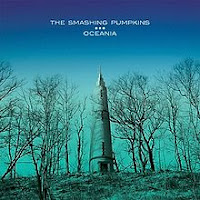 You can listen to 'Oceania' here.

The Smashing Pumpkins is not the band I discovered in 1993 after the release of its second and break through album 'Siamese dreams'. But then again in a way it is the same band. I remember an interview with singer and writer Billy Corgan at the time in which he accused his three bandmates of total passivity in the studio. Between the lines I read two things: one, this line-up will not last for long; two, that Corgan wanted to do everything and have total control over the direction of the band. With the demise of the original band, mostly over drug abuse it seems, the popularity waned, after which Corgan pulled the plug and released a solo album and the Zwan band effort. All to not too much critical nor commercial acclaim. Matt Chamberlain was back on drums, but with Oceania not even he is among the persons accompanying Corgan as The Smashing Pumpkins. So much for the history lesson, what about Oceania?

I'll be straight forward right away: Yes, I like the album, as much as I'm able to really enjoy albums by the band, this is one of their better ones. The Smashing Pumpkins, like most bands of the grunge era, have this sludgelike guitar sounds and singing, as if the music is dragging this enormous ball behind it on an ankle chain. That made it hard for me to listen through whole albums, whether they are called '10', 'Siamese dreams', 'Alice in Chains', 'In utero', etc. (With one exception: 'Nevermind', which is a great pop album in heavy disguise.) Next to that Billy Corgan's voice is not always a pleasure to listen to. Especially if the melody lines are somewhat monotonous. This is dealt with in a very pleasant way on Oceania, as Corgan's voice is dubbletracked by a female voice just under his leads. This sounds just great in several songs.

Oceania brings out the best in The Smashing Pumpkins. Several of the songs are wide mixed songs allowing the songs to breath, which does Corgan's compositions a lot of good. 'Pale horse' is such an example. The song comes alive in the details and the vocal melody. Another example is the title track. Even the guitar battle, with a great effect in which the sound seems to be sucked back into the speaker, at the end is stylish, not aimed at filling the whole sound scape.

At the same time the album brings a few classic The Smashing Pumpkins riffing like the intro of 'The chimera'. There is a main difference. The riff isn't aimed at an audio onslaught, like in the days of old, but at melody. As such the album is in balance. It seems to me like Billy Corgan is quite content with where he is and allows himself to explore his music just a little further than before. This leads to an album that is quite pleasant to listen to, rocks out and holds back at times, which makes the songs that stand out. Yes, I'm surprised in a quite pleasant way, as I more or less had written The Smashing Pumpkins off as something from the past. The band's back, so enjoy it.

You can order Oceania here