Streets in the sky. The Enemy 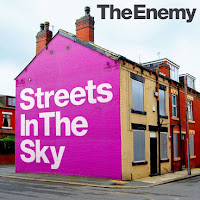 You can listen to 'Saturday' here.

Let me call this album punkrock, with tendencies to punkpop. The guitars are there, played very fast with melody lead lines. A pumping bass and hard-hit drums. The slightly shouty way of singing. The whoas in the choruses. The anthem way in which choruses can be sang along to. So Streets in the sky offers nothing new. The standard set by 'Smash' and 'Dookie' is met with great perfection. This means that Streets in the sky has to convince its listener with its songs. And let this be a major charm that The Enemy offers on its third album.

The Enemy stems from Coventry in the UK. This is not a surprise if I take the melodic strength of most songs into consideration. A long string of UK bands from the mid-sixties right up to the present day can be recognised in here. From 'All day and all of the night', 'All or nothing', The Who riffing, The Jam and The Buzzcocks and let's name The Rifles here also as a modern day equivalent. This English songlike superiority is combined with the snotty, here we are and take it as we come attitude of US punkrock bands. This makes The Enemy sort of the best of both worlds.

It's a pure joy to listen to strong, potent songs like 'Like a dancer' and 'Come into my world'. These songs have everything a good rock-pop-punk song needs to stand out. After these great efforts, there's a variation in the type of songs for the first time. 'This is real' starts real quiet and slow, before it's turned into an anthem of The Killers like proportions and 'Baby O'Reilly' like keyboard sounds. It may not be for nothing that the album title comes from this song. The View comes into mind in '2 kids', but the difference in approach to this song, more acoustic and poppy, is what adds to the flavour of Streets in the sky.

Maybe there are too many influences recognisable in the songs, as e.g. I can also add Edge-like guitar sounds. If you want to look for weaker points then it's only there (and the extremely ugly, but attention attracting, cover). Who cares if influences are used so well as here. The Enemy is definitely its own band.

The obvious ability to play with the arrangements of songs is what can only make The Enemy a British band. On Streets in the sky they appear at the top of their form without hardly any flaw or filler. There are many songs to enjoy and sing along to. My attention doesn't waver right up to the last notes and with that The Enemy beats most of the bands I've named. On the other hand they better. If you can't come up with a trump album once in every four years, in which 60's and 70's bands might have made five, as a band you're in trouble. The Enemy isn't. Great album, great songs!


You can order Streets in the sky here