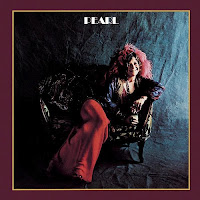 You can listen to 'Move over' here.

The 40th anniversary of the release of Pearl was celebrated with a three disc legacy edition, with different versions, studio chit-chat, an instrumental, and an odd out take, all under the name 'The pearl sessions'. The reader has to consider that Janis died of an overdose during the recording of the album in 1970. She died before I had ever heard of her or at least consciously. 'Me and Bobby McGee', the famous single became a hit in 1972 over here. I bought a cassette tape of Pearl somewhere at the end of the seventies, the cd somewhere around 2000. We are going to leave the legacy edition for what it is, a curiosity for curious people and focus on Pearl. How good is the album in 2012, the year Janis would have become 69?

'Both ends burning', the Roxy Music song seems to apply to Janis Joplin. Her voice strained beyond what is applicable for singers, her life difficult, insecure and full of pain. Looking at her performance at the Monterrey festival in 1967, it is almost painful to see, but so utterly, utterly fascinating and fantastically good. Whatever the case, on Pearl Joplin is in great form and surrounded by great musicians that present her with the musical touchstones to excel. Blues, soul, rock, bluesrock it is all played for her and she gives it her all, perhaps even beyond that. It's too cheap to say that maybe she knew her fate, but she has made the record that is her rightful claim to eternal fame. Musically the album comes close to what Joe Cocker would be doing soon on the 'Mad dogs & Englishmen' album and tour. Full out rocking, great guitar solos and a joint piano and organ and rocking that voice. Joplin's Full Tilt Boogie Band matched Cocker's band easily.

Pearl has some great rocking songs steeped in blues, soul and gospel. It all starts with 'Move over'. Great riffing met by great singing. I just love the roughness and pureness of the song. It sounds like a one fling take, which it isn't, but the freshness of the presentation gives off this impression. The guitar solo and especially the fast downwards progression is meticulously played by John Till. 'Move over' is also the only Joplin original on the album, with the a-cappela 'Mercedes Benz' which she based on Michael McClure's poem. All eight other songs are covers from different backgrounds, but for sure giving away her influences. Bobby Womack, Dan Penn and Spooner Oldman. Jerry Ragavoy and Mort Shuman, Kris Kristofferson. Black and white soul, singer-songwriter and country. But all became Joplin standards.

Janis is no Aretha or Otis, but her vocal intensiveness matches them easily. Her voice is harsh, sometimes nearing nails on an old-fashioned blackboard. The emotions seem to come all the way down from the very last atom in the longest nail on either of her small toes. Nearing the breaking point of her very existence. 'A woman left lonely' despite or because of that is of the greatest beauty a singer can offer: his/her all. And that is what Janis delivers here. Supported by the piano of Richard Bell and the organ of Ken Pearson. They allow her the freedom and give the support she needs to excel.

Not all is doom and gloom. The instrumental 'Buried alive in the blues' is tremendously upbeat. Was it never finished as there was no good vocal delivery or not yet sung? The already mentioned 'Mercedes Benz' is a nice joke 'of great social and political import'. 'My baby' gives a longing Janis, waiting for her lover to come. 'Me and Bobby McGee' shows that Janis and band can pull of a great country song as well. The lightness in playing gives the song the playfulness that makes it a great song. The despondency in the lyric, "the nothing left to lose", is brought by Janis with conviction. From just a story to truly losing someone. When the band speeds up, the song is given its final push to eternal fame. The Full Tilt Boogie Band is allowed to flex its muscles and present a few solo's.

There's no saying where Janis' career would have gone. Neither whether she would still have a voice today if alive. Fact is that the band recorded covers mostly, in a very superb way, but covers they are. There would have been a day when they were no covers left to play, although her male colleague Joe Cocker is still recording and touring at 68. So why not Janice? We will never find out. We have Pearl. Janis dived deep into her soul to deliver these vocals, so a true pearl the album is. The conclusion anno domini 2012 can only be: a masterpiece.


You can order Pearl here