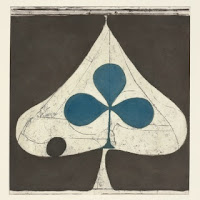 You can listen to 'Sleeping ute' here.

It took some courage for me to start reviewing this album. Not having liked 'Veckatimest', despite all the clamour in the press, is one. The complex songs and weird rhythms just didn't land. Shield basically got the review: "Brilliant, but more of the same". That was two. And then I listened anyway and was intrigued, by the utterly brilliant, but hard to understand songs. That's three. What was I to write on the Shield? That's four.

This music will never endear itself to me. For this it is too complex, too far out, sometimes even too weird. Still, I was fascinated and slowly drawn into the songs, the structure, the weirdness and started to reckonise structures, melodies and beauty. Shields holds pure, but at times well hidden, beauty. Let me start there. Having listened to the album several times in different circumstances, I know that I truly like it and discover something new each time I put it on. My starting point for getting a grip on the music, is the vocals. Where in most songs the singing and the voice are the icing on the cake, with Grizzly Bear it seems the other way around. The melody of the vocals is the foundation which the rest is held up by. The point from which the great experiment starts. (And in a song like 'What's wrong' even that anchor is hoisted.) As if after a song is finished everything is stripped away except for the vocal melody and then built up again, layer by layer. A song construct.

Past the singing it's a free for all. Sound scapes of synthesizers, stretched guitar notes, small embellishments in the form of a piano note, the treatment instruments receive, intricately haunted string melodies, reluctant rhythms, a few horn notes. Everything's possible. Despite the fact that musically the bands are fairly unrelated, Shields reminds me most of Steely Dan. The way the songs seem to be constructions of music and the way complex songs appear totally fluent. Not an instrument nor note is used without an idea and clear effect behind it. Each note has an effect on the atmosphere of a song. In the final song, 'Sun in your eyes', even in the singing. The other influence is past 1965 The Beatles. The anything is possible vibe that surrounds Shields. The main differences being that Grizzly Bear is not jazz influenced (Steely Dan) and not trying to find the perfect pop song (The Beatles). For this the band is too left of centre. And some Arcade Fire, like in 'A simple answer' where it's the most obvious.

From Grizzly Bear's side of the universe the band does reach for perfection. Nothing but, I'd say. The desolation of 'Half gate' is impressive. From the cellos starting the song to the driving guitar and modestly pumping piano, to rolling drums the song is being pushed towards the (at first small) variations. Don't forget to notice the bass notes in the second verse. If anything we have an indie pearl here that appears to go on and on in ever changing instruments.

With only ten songs the album is over before I know it, having undergone an alternative rollercoaster of songs, moods and musical adventure. If anything, I may have to listen to 'Veckatimest' again and see if I had clay in my ears or something back in 2009. Shield is a treasure trove of musical adventure, that a lover of a little more alternative music could spend hours in, lost in discoveries and wonder to finally having to admit that Shields is a great pop album, well disguised, but pure pop. To my surprise, that's what I concluded. Brilliant, pure pop.

You can order Shields here