I bet on sky. Dinosaur Jr. 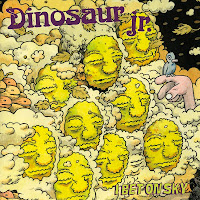 You can listen to 'Watch the corners' here.

Dinosaur Jr. is around for many a year. When I was in college the band made its first albums and I missed them all in ignorant bliss. When other bands from around the scene in Boston broke in the early 90ties I noticed them. I think I have every single Buffalo Tom album e.g. Only with previous effort 'Farm' I picked up Dinosaur Jr. and liked what I heard. So here's my second ever review.

Dinosaur Jr. is a reference to dinosaur Sr., Neil Young's moniker after punk broke and he effortlessly became a part of the punk movement with a part of 'Rust never sleeps' and 'Live rust'. Jr. only listened to the harder parts of Sr. as I bet on sky is a rock album with gritty guitars and hooked rhythms. J. Mascis' voice goes well with the sound of the guitars. He does not appear to have loads of volume in his voice, but carries the melodies in his own characteristic way. The singing is basic, at best an invitation to step into the song. Not the big advertising billboard of the band. Still pleasant to listen to.

Most songs are stepping stones to let a guitar rip at some point. 'Watch the corner' has this great guitar solo that is released at the end of the song. The kind that stops right on time, because you want it to last for ever. The way the songs are arranged pose a problem for the stage. Dinosaur Jr. is a trio outfit, but has guitars for at least a double setting. Drummer Murph is a hard hitter, filling every nook an cranny of the sound with hard and fast pumping rhythms. This way he lays a foundation that the songs are built on. The same goes for Lou Barlow's bass. J. Mascis lays down a few rhythm tracks on guitar, loud and fast, over which he sings, solos and plays lead lines. A few songs have this 'Like a hurricane' keyboards floating all over the rest of the song. This way a massive wall of sound is created that makes up Dinosaur Jr.'s sound. This would be hard to bear for me if there weren't songs shining through this massive wall. In most cases they do. It's J. Mascis' voice that makes the difference. The somewhat drawling way of singing gives most songs the air they need. Not much else does.

The quality of the songs are at a seldom heard constant level. Some faster, some slower, but all songs have elements of interest that keep me interested and these great, howling solos where J. Mascis lets it all go out. If he isn't much of a talker (see Wikipedia), he speaks volumes through his guitar. Especially on the album ender 'See it on your side'. An ear-bleeder when played live, I bet on that.

Two songs on the album are by Lou Barlow. 'Rude' is a bit more up-beat country-ish rocker. That could have been on the repertoire of Dutch band Johan. I love the song. The double solo in the middle is great fun. 'Rude' is a very pleasant variation in Mascis's wall of gravely sounds. While Barlow's 'Recognition' is a QOTSA light, holds a surprise in the form of the acoustic break followed by another good solo and also provides I bet on sky with a bit more light.

I bet on sky is one of the better albums of 2012 so far. The heavy sound holds enough melodies, excitement and tension. A lot is going on and several solos are great. If you're into the heavier stuff I bet on sky is definitely an album to check out.

You can order I bet on sky here