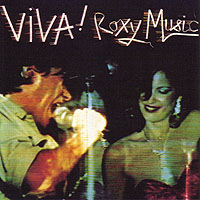 In 2012 it's 40 years ago that Roxy Music released its first album. To celebrate this a box set containing all studio albums and other goodies was released. In WoNo Magazine's blog the albums are held up to the light one by one. Regular contributor Erwin Zijleman does an excellent job here. As the only live album officially released during Roxy Music's recording career is not a part of the box set, Wo. is taking over review duties.So what is his opinion of the Viva! Roxy Music in 2012?

You can listen to 'Both ends burning', of course in the live version, here.

It's only 36 years ago that I bought this album at a sale with the money earned from my first real summer job. I knew four Roxy Music songs at the time. 'Love is the drug' had become a major hit in 1976, 'Virginia plane', 'Pyjamarama' as singles and I had 'Both ends burning' and perhaps 'Out of the blue' on a cassette tape. Was I in for a surprise! Long experimental songs like 'The bogus man' and 'In every dream homes a heartache'. I did not quite know what hit me, didn't have a notion what these songs were about and only had the vaguest idea of the tension that was built up in these songs. Through the years I liked the album better and better, but at a certain moment it disappeared in this huge stack of records, as old records tend to do. So, where am I with Viva! Roxy Music in 2012?

To be honest, not much has changed through the years. Viva! is a tremendously exiting live album, that gives a good impression of what it must have been like. There may be overdubs, but small mistakes in Brian Ferry's singing, the absolutely shrill harmonies in 'Both ends burning' can all be heard. So not everything was polished away in the recording studio. The songs I liked most, still stand out as fabulous rock songs. 'Out of the blue' and 'Both ends burning' rock so good. Especially the latter song. Andy McKay is soloing his heart out, Phil Manzanera plays a mean rhythm guitar and gets to solo as well, the bass runs I just love and Eddy Jobson lays down these synth carpets pasting the whole song over, while leaning back when the saxophone kicks in again. And let's not forget the great rhythm of the drums. This song must have been loads of fun to play.

The tension in a song like 'Chance meeting' is very well done. Slow, deliberate, almost mean. It makes the mind wonder what happens really. The let go comes when 'Both ends burning' kicks in (at least on record). 'If there is something' is another song that I've always liked.The very bluesy structure is loosely played out. Mazanera's guitar reminded me of some soloing on 'David live' another album I bought at the time. But there is another superstar on 'If there was something': Eddie Jobson, who replaced Brian Eno just two years before Viva! was recorded gets to play his electric violin. This gives the song a very distinct character.

'In every dream homes a heartache' is another song which did not really go well with me at this young age. When I hear it now, it is such an exiting song. The tension is almost tangible, at times it seems like it's going to snap. Relentless, with all the strange noises in the back ground, distorted echo's. The guitar and drums that kick in every four bars and let off again, like dog on a leash snapping and ceasing. The text goes totally weird of course, "My breath is inside you", go figure out where this leads to. And then it rips and rips good. This song is so well built and played out. Tingles down my spine!

Viva! ends with one of Roxy's singles, the up tempo 'Do the strand'. A great song to end a show with, I suppose. Fast, extremely danceable and still Roxy Music enough to be credible as an arty song.

Summing up, Viva! Roxy Music totally holds up all these years later. The album shows a band at the peak of its might, despite the fact that the core members abandoned the mother ship for circa four years. What changed for me is that I appreciate the album as a whole more. Including 'The bogus man', which is plainly a great track. If Viva! proves anything, it is what a mistake Brian Ferry made. 'Let's stick together' is great fun, but this is where he peeked as an artist and writer, stimulated by band members with loads of creativity themselves. Pure shame.