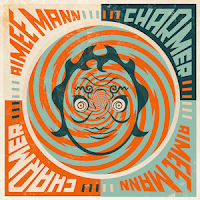 You can listen to 'Charmer' here.

At first listen of the title song opening Charmer I thought straight away: "Been there, done that". Boy, am I glad that I turned that notion down and gave Charmer a second, third, etc., chance. Aimee Mann's voice is so dominant to her sound, that I almost forgot to listen beyond her familiar introduction, like what happened to me with '@#%*! Smilers', her previous album.

Aimee Mann is around as recording artist for 30 years. Starting off in punk outfit The Young Snakes in Boston, to new wave band Til' Tuesday and solo since the early 1990s. As most people I was introduced to her through 'Magnolia', the epic movie, which featured several of her songs, followed by 'Bachelor No.2'.  I really liked 'The forgotten arm' (2005) and lost track some what as 2008's '@#%*! Smilers' was just a little less to her previous effort and a long spell set in.

Back in 2012 'Charmer' grew upon me more and more. The lushly arranged album is everything the title promises, a total charmer. And unlike what she sings in the title song, there is absolutely no need to hate herself. This album gives her every right to be very proud of her latest effort. The songs were put on tape with a keen eye for detail and elements that it takes to make them more special.

Mann has a somewhat (now ageing) girlish voice that can slide off towards sounding as if she's bored. If her songs are not perfect this for me becomes a hindrance to continue listening. 'Crazy town' is a song that easily could have gone wrong, but doesn't. Also for this reason I'm happy to hear that she seems to play more with the ranges of her voice, like in 'Soon enough' where her voice goes deeper and higher, which sounds very appealing. The same in 'Living a lie', her duet with The Shins' James Mercer. Another pearl that Aimee Mann gave us as a gift.

Most songs on Charmer are melodically very strong. Not that they are necessarily up beat. Far from it. Most songs have a melancholy edge, a tristesse in them, which is a natural element of how Aimee Mann's voice sounds. In 'Gumby' this is off set and underscored by the tempo and musical embellishments at the same time. Which is a feat to achieve.

Taking it all in at this moment in time, I have the inclination to write here that in my opinion Charmer is Aimee Mann's best album to date. I like it as a whole, which was not the case with any previous of her albums. The variations in the vocal melodies, the arrangements of the songs, Aimee Mann's vocal presentation all stick out. At 52 she is at the top of her game, there's just no denying the fact. Charmer is an album which you may need to check out, not want to, NEED TO!

You can order Charmer here