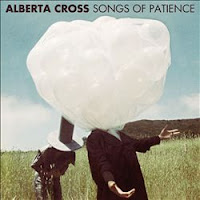 You can listen to 'Lay down' here.

A few years back I read the review of Alberta Cross' début album and had it jotted a mental note to have a listen to it. Somehow I never got around to it, until quite recently I listened to 'Broken side of time' for the first time and instantly liking it. To my pleasant surprise the band released a second album, Songs of patience, fairly soon after. I found myself playing it more and more and liking what I heard.

Alberta Cross, the band name is supposed to be an anagram, so if you feel like it, tell us what you've found, is a duo that started in London in the U.K., but migrated to Brooklyn, N.Y. Singer guitarist Petter Ericson Stakee is a Swede, Thomas Wolfers, the bass player comes from London. Others help them out to make a band sound. The music they make is the louder variation of pop music. Some songs could have been sung by Mika as well as Oasis. A song like 'Lay down' would work for both acts. It shows the uncanny pop feel Alberta Cross brings to its music and still stay credible, as 'Lay down' is an almost epic song.

Songs of patience is an apt title for the album. There is no haste, no aggression. A sort of hippyness without the psychedelia. As such memories of 2004's 'Self help serenade' of U.S. band Marjorie Fare come to mind, but also The Verve. The few photos I saw of the band portray two hippies and the album cover is as weird as covers can come. What it does not do however, is lose itself in psychedelia. Alberta Cross presents songs that are mostly in the mid tempo range, that are well crafted and worked out with an eye for details. If you listen attentively you can hear all sorts of ear candy pop up over the basis of the songs. When 'Magnolia' appears to become to one sided, a chorus comes in changing the mood of the song, making it interesting again. The band knows what it's doing. After the quiet 'Magnolia', the drums and bass kick in hard in 'Money for the weekend'. A very Britpop, almost punky kind of song with attitude to go. As not all songs are kept quiet until the end. 'Wait' explodes near the end in distorted guitars, lead lines and general hard playing. The variations give Songs of patience something attractive to listen to at every stop. 12 Songs long.

I'm filing Alberta Cross under Britpop I've decided. There are enough elements of Oasis, Supergrass, etc. to justify as much. Added is some inklings folk, Donovan style and keyboards that give a few songs a 60ties feel. Stakee's singing is Britpop with the long, broad sounding emphasis on the vowels. So with 'Baby' by Tribes (click here), I have found a second pleasant addition to the Britpop family this year. Songs of patience shows that there are paths left to explore for a genre that has was declared dead and buried for some years now.

You can order Songs of patience here