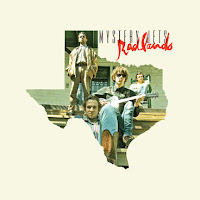 You can listen to 'Someone purer' here.

Mystery Jets is the band I remember from a gimmick. The band had one of the dads as a band member at the release of the first album. The music was so so and the albums after that did not really ring any sort of bell for me. So it was a while before I decided to give Radlands a spin. And not regretting it to this day. Mystery Jets have come up with a great pop album, with some interesting mood changes and fun singing.

Looking at Wikipedia the dad's still there, a full member of the band to this day. Something I hadn't expected. So no longer a gimmick, Henry Harrison plays guitar and keyboards to this day in Mystery Jets. His son Blain is responsible for most of the songs.

I can't really explain why Radlands is one of the albums I play regularly of late. Better songs or less competition? Positive or negative? Although 2012 is not turning out to be a pop year that is going to be remembered as pivotal (so far), I like to think that Radlands contains a couple of great songs. Mystery Jets has successfully incorporated influences from a band like The Shins in 'Someone purer' while touching on punkpop and Kaiser Chiefs at the same time. The song is a rare mix of exuberance and melancholy. Yes, the way The Kinks were able to that in its hay day. Blaine Harrison is able to sing like Ray Davies and James Mercer in one. With the songs to boot, Mystery Jets could not go wrong.

´The ballad of Emmerson Lonestar´ is a quiet, open song, setting a great mood to get into, before erupting into the end into a fiery storm. The band plays with dynamics in a great way in this song. Separation song ´Greatest hits´ is a bit tacky, but mentions the albums that are important to Harrison. (It includes 'Village green', thank you.) The song has its moments though.

The further Radlands plays on the more I'm thinking of THe Kinks's late seventies album 'Low budget', U.S. pop and rock influences, some incorporated disco ('The hale bop'), a ballad and a little down right rock here and there. Looking at the album from this angle, I notice that it tickles my nostalgia. 'The nothing' simply takes me back 30 odd years, playing records on my second record player, just before I switched to the real thing: a stereo stack. So old school now. Next up are songs containing something close to country, a gospel choir. There's not much on the side of pop that was not tried out on this album. Let me not forget 'Lost in Austin' one of the best and most beautiful tracks on Radlands. There's definitely some Blur in there.

A question that pops up is to whom this album will appeal. It's a little of a lot and not exactly 2012. It may be an album that falls in between everything and nothing at the same time. For whomever the album is meant to appeal, it appealed to me and I suggest that everyone who is interested to listen to an interesting mix of Britpop and some good old U.S. influences, does just that. Radlands is a successful blend. Not the best ever, but a very good runner up.

You can order Radlands here