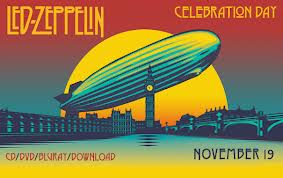 You can listen to 'Celebration day' here.

It was somewhere in 1968 that session guitarist and The Yardbirds bass and guitar player Jimmy Page found himself more or less alone in The Yardbirds with a contractual tour to go on. So he hired some musicians to play. This went so well that they changed the band's name to The New Yardbirds toured the U.S. and decided to go on under the name Led Zeppelin. Recorded an album, released ´Good times bad times´ in the spring of 1969 as a single and the rest is history. It was one big rollercoaster of rockstardom till John Bonham´s body gave out. In 2007 the band did one last gig in London´s O2 dome with Jason Bonham as drummer. Yes, John´s son. The movie was exclusively premièred in 10 Dutch theatres at the same time: Wednesday 17 October 2012 at 21.00 hours. The main hall of this theatre was packed and WoNo Magazine was there.

'Celebration day' is the title of the show Led Zeppeling played  on 10 December 2007 in a sold out O2 Arena in London and the title of the movie the band releases of the one-off event. The experience in the movie theater was near overwhelming. Larger than life the performance the band gave was captured on film and gloriously displayed. The performance itself only deserves the description near perfect. The band rocked hard. Fuelled by Jason Bonham's fantastic and extremely powerful drumming, the three original members showed the world once more and for a final time (never say never, but it certainly looks like it) that Led Zeppelin was and is one of the world's best rock outfits. 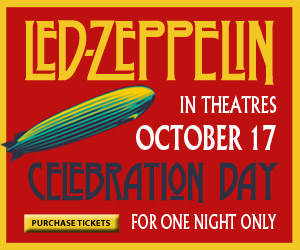 Led Zeppelin managed to stay away from a major pitfall: hiring all sorts of back ground singers, other musicians and/or bringing in guests. What you get to see is Led Zeppelin, three musicians and a singer. Just like of old John Paul Jones switches from bass to keyboards, Jimmy Page may use loads of effects and a octaver and like his dad Jason Bonham sings a little backing vocals. That's it. We saw Led Zeppelin as it is and was. Nothing else.

Led Zeppeling has at least four faces. 1. The rock fuelled blues monster (or blues filled rock monster). 2. The grove and riff driven rock monster. 3. An experimental folk band. 4. A classic hard rock band. Three of four aspects were incorporated in the show. Folk, except for the intro part of 'Stairway to heaven' wasn't present. The other three in abundance. It was hard sitting still in a theater seat, as there was enough to want to dance to. Stop starters like 'Nobody's fault but mine' or 'Trampled underfoot' just beg for moving. They groove so good.

Kicking off with first single 'Good times bad times' the setlist was near perfect. Near perfect as the leaving out of 'Immigrant song' and to a lesser degree 'Heartbreaker', is unforgivable. The very last show and no 'Immigrant song'? Sorry guys! For the rest I sat in awe. Robert Plant's voiced has aged, yes, but tremendously gracefully to a slightly deeper region. He led the band through all hits and major album tracks and left the centre stage to leave room for others. Jimmy Page showed what playing rock guitar is like. All the different styles, the bowing in 'Dazed and confused', the theramin combined with wah wah guitar sounds, he played them meticoulously. His face no longer lent itself for rock poses in 2007, his playing gave him every right to do so any way. Granddad giving the world a lesson.


If 'Celebration day' gave away one secret (in as far it ever was one if you listened to Led Zeppelin), it is how important John Paul Jones was to the band's sound. Next to being a great bass player, allowing Jimmy Page to take off half of the time, he gives colour to all the songs involving keyboards, playing bass pedals at the same time. It was a delight watching him play.

What is wrong between Page and Jones I don't know, but I seldom saw someone on stage so conciously ignoring his colleague from the first to the last second of the show. Turning his head away, turning his back, each time contact was sought by Jones. He was even excluded from the final embrace on stage. This is a stain to the movie and the show itself, but the only one. Director Dick Carruthers did a great job capturing a great rock band of the past on film in its final farewell in honour of Ahmet Ertegun, the famous Atlantic Records chief, who signed Led Zeppelin in 1969, who died in 2006.

My personal favourites came by. ´No quarter´, ´Since I been loving you´, ´Stairway´, ´Whole lotta love´ and a fantastic version of 'Kashmir'. It all ended with the song whose title says it all: ´Rock and roll´. Song by song one thing became clear to me. We were previewing a monument, a monument that people are able to watch for ever. One that will only let the legend grow. This is and was it. Led Zeppelin is huge and will remain so. The cap stone of the pyramid, sealing Led Zeppelin's career, is called ´Celebration day´. There's nothing left to add and they know it. This was it, folks. And those who happened to have been in the O2 Arena, well what can I say?

You can make a reservation to buy Celebration day here