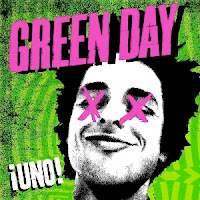 You can listen to 'Kill the DJ' here.

Whoa! In six months three albums. Green Day does a 'Sandinista' in three instalments. Overkill? That's to decide on six months from now. In the mean time Uno! is definitely not a punishment to listen to. It's as much fun as a Green Day album should be. Not that it is all about starting back where we left of three years ago with '21st Century breakdown'. If anything the band has gone back to basics. Three guys, three instruments. Green Day proves that it is good enough to live up to "simplicity".

Let's not forget, Green Day is around for 25 years. Formed in 1987, it released its first album in 1990. As most of the rest of the world I discovered the band through the video to 'Basket case' and bought 'Dookie' soon after. From there I followed the band through a great set of records, 'Nimrod' (1997), 'Warning' (2000), 'American idiot' (2004) and then I just couldn't get used to '21st Century breakdown'. It was just a little too much of everything. That's why I really like what I'm hearing on Uno!.

Nothing utterly exciting is happening here. Green Day does what it's good at. Writing punkpop and pop songs that are great fun to listen to and sing along with. Good time fun songs, much like The Beach Boys' in the early 1960's. By letting pretensions go the band has more or less come back to the sound of three guys on guitar, bass and drums that sing songs together. Of course there are overdubs, with cool sounding, fully charged guitars flying into the mix, several nice solos and some great harmonies here and there.

Single 'Kill the DJ' has a relaxed ska as a basis. (Poor DJs around the world that have to play the record.) The song's an exception on this album. Most songs just go up and down in a straight forward way. Even Mike Dirnt's characteristic pumped up bass sound seems amiss. That makes Green Day more like other US punkpop band. Sometimes even getting close to Fountains of Wayne or Weezer. While the singing at times even reminds me of the 1960s The Hollies in the elaborate harmonies that come by several times on Uno!, e.g. in 'O love'. As long as they do so at the level of these bands' best songs, that curries favour with me. Green Day isn't a punkband any more for a long time. Its popsongs are at such a high level, that it can be called one of the best bands in the world.

Uno! doesn't have a single song on it that does not rise up to par. Just like it doesn't have a song that totally jumps out. This means that Uno! is an album with songs at a consistently high level of songwriting, making it a very good album. To nag just a little. Was it necessary to kick in each solo in the same way, like an airplane flying in? You understand, dear reader, if this is the only critique I can come up with? I am looking ahead with pleasure to the next two releases.

You can order Uno! here