Enjoy it while it lasts. Spector 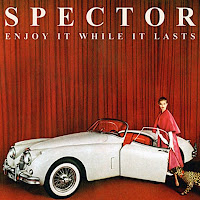 You can listen to 'Friday night, don't let it ever end' here.

This spring I liked Spector's single 'Chevy thunder' so much that I wrote a blog post on the song. The contribution ended with the question whether the band would be a one-day-fly? Listening to Enjoy it while it lasts I'm feeling merrier by the song and decided to just do what Spector gives advice on here: enjoy it while it lasts.

This album sits chock-full with pop goodies layered with a certain gloom. Not so much from the music, but from the full voice of Fred MacPherson. His voice reminds me of early 80ties bands and Editors, but luckily for me musically the band leaves that doom and gloom end of the world as we know it far behind it. The title Enjoy it while it lasts may suggest that the end is nigh, but if it is, it is the dancing on a volcano variety. Spector excels in fun, danceable songs that invite the listener to move and sing at the same time. 'What you wanted' has these great fun call and respond singing, where the band shows it can find a melody where one's hidden in a song to most.

Spector can not be accused of originality. The band takes some very well trodden pop paths. The Kooks, Razorlight, Editors, some of the U.K's most popular bands in recent years come by, but I happen to think this band's better. They have the better melodies and seem happier with what they do. The biggest influence are The Killers, I'd say. And again I have already played this album more often that 'Battle born'. Like The Killers keyboards play an important role on Enjoy it while it lasts. What Spector adds is a splash of hardly disguised disco in several songs. The Petshop Boys as influence? This gives its songs this extra pop element which is missing in the songs of the bands mentioned above. And it's not as if the guitars don't play a role on Enjoy it while it lasts. They are all over the place in tight rhythm, delicious licks and great lead melodies.

And then this thought hit me. One of my absolute favourite tracks of the 00s is 'Mon amour' by Swedish band The Plan. Spector leaves out the total madness in the singer's voice, but has that pop feel down to perfection in 'Chevy thunder'. (The wordplay with 'Taking my own life" is well done textually btw.) But what about the rest of the album?

There are several songs that I just love on enjoy it while it lasts.The above mentioned 'Friday night ..' is a great popsong. (And video by the way. Decadence, bright colours, beautiful stills, very arty and still party? Yes, dear reader, it is.) Twenty nothing has a 'Candy' like drive and a great refrain and 'Upset boulevard' has the same energy a my favourite. 'No adventure' is this slow, delayed song, almost crawling into my ears, but with this exquisite melody and keys. I totally love it. "We are to old to die young", they sing. Welcome to the club, boys and enjoy the rest while it lasts! And then 'Celestine' still is coming up. What a chorus!

Most songs are well arranged, the harmonies are in all the right places, the fun is as high as on 'Employment' by Kaiser Chiefs. Do I need to go on? It looks like Enjoy it while it lasts is one of the most perfect pop albums of 2012, one that may well grow into one of my really, truly favourite albums. Well done, Spector! The title comes from a reference about piracy and illegal downloading: "Enjoy it while it lasts".

Of course 'Chevy thunder' is the best song on the album. Spector may never make a better song, in my opinion that is. What surprised me is that there are several songs that come close.

You can order Enjoy it while it lasts here