Doom and gloom. The Rolling Stones 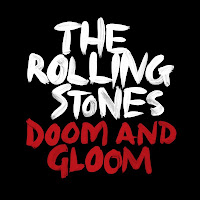 After days of twittering away The Rolling Stones released a new single for the first time since the 'Bigger bang' album of 2005. This morning BBC's Radio 2 had the world première at 08.15 AM. Not much later I found out the track has been placed on You Tube (click here). I was the 301st listener/viewer of a lyric based video that definitively is worthwhile viewing. Paint flying all over the paper and some nice effects in there too, despite the bare concept of the video.

That's all fine, but what about the song? As almost always I was disappointed at first listening to a new The Rolling Stones single. Starting all the way back with 'Tumbling dice' in 1972, it nearly almost happened without failure. Too high expectations? The good news is, that it always just took a few listenings for me to get used to the songs and for them to become a part of me.

My first reaction to Doom and gloom was, oh a typical Keith 'Happy'-like riff. Heard that before. Getting into the song I noticed how tight the band was playing, how smooth the verse went over into the chorus. And above all: We are hearing The Rolling Stones. No embellishments in the form of keyboards, horns, nor major background vocals. No hiding and yes, I started to like what I was hearing and softly singing along to the chorus the second time around.

Mick is in great form. At 69 he carries off his Mick sneer in a very confident swagger. The song, in a very marginal way, is about the end of resources in the world, the doom and gloom that futurologist project for this planet, most likely correctly so. So why not dance?, Mick asks us. Is it the dancing of the ignoring the signs or on the volcano type? That part of the invitation remains a question to me, although the result is the same.

The guitars are all over the place with great in-flying accents and lead melodies over the tough riffing by Keith and Ronny. Not a real solo. There definitely are some overdubs here, but all very well placed and lifting the bare and basically normal song to a higher level. Charly gets the final spot with a drums only roll at the end of the single. Just like it's live. Well deserved too. But only after delivering a tight performance keeping the song together.

Let's not kid ourselves. Doom & gloom is no 'Paint it black' or 'Saint of me'. It's a good, solid, but average Stones song. Being that, it is a lot better than any a song many another band will ever make. Good to hear a new song, gentlemen. Let's just not wait too long and come up with more like this. I'll be honest here. I'm not looking forward to another greatest hits format. Grrrr! or not. I will go out and buy Doom and gloom though. Preferably on good old 7" vinyl. I gave up on ever becoming complete, although I'm close, keeping up with the new stuff is easy.

You can buy Doom and gloom as a download here.
Gepost door Wo. op 12:09