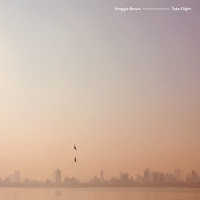 Two new songs by one of my favourite bands from The Netherlands released on Spotify. Maggie Brown is no stranger to these pages, so it ought not to come as a surprise that I am sitting at the edge of my chair, listening intently to this unexpected, but oh so pleasant and welcome a surprise.

Late June I had the honour to have the band play a living room show here. Magic happened between band and audience. People left telling how touched they were by the intimate music Maggie Brown creates. The band gained fans on the spot. There were new songs in the making it was said and here they are.

Take Flight is a beautiful ballad. A delicate, fragile song, where not a note is played that shouldn't be there. Marcel Hulst shows his songwriting mastery once again. From the soft, electric guitar intro the song just floats. The lyrics opening the song, "To build a plane yourself, would make a good story", seems inspired by Tommie Wieringa's novel 'Joe Speedboat'. The band takes the song through a few minor changes and one major change that add to the atmosphere and mood. 50 Years of popmusic course through the veins of Take Flight in all the right ways.

'Into Motion' is a tighter song, with a compact rhythm, that in the next sequence moves into familiar Maggie Brown territory. Familiar, so at an extremely high level of pop music, where the singing seems to flow effortlessly. The mood change to the electric guitar solo is so well timed as is the rhythm change right before and during the solo. Ingeniously Maggie Brown plays with the mood of its listener here. The change is so subtle yet so undeniable, making 'Into Motion' another favourite instantly.

A new album is still another year away and we fans will have to make do with these two presents the band dropped. Judging from them the wait is going to be so worth its while.

Maggie Brown is one of the best pop bands The Netherlands has to offer in 2018. What does it take to make people notice? The band plays in the Popronde, so start by going out and see them play. Find out where here: https://www.maggiebrown.nl/. With the full endorsement of