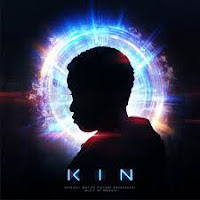 Mogwai is a Scottish band that is around for at least two decades, but somehow I never gave one of its albums a try. The post rock, instrumental music just did not appeal to me. Now a soundtrack to the movie KIN fell on the mat, so I decided to give the cd a chance.

I am not one for movie soundtracks, not the ones with all the (hit)songs woven into movies nowadays and not of the original score. The fragmentary sounds usually have no real start or finish and I often do not even notice music in a film when I'm following the story, watching the movie evolve on the screen. My senses are already filled without needing the music. Although subconsciously the score may contribute to the feelings I feel during the story. Hearing this music disconnected from the movie, doesn't speak to me either.

So here's Mogwai with a film score. Two negatives are at the start of this adventure when I slip the cd into the player.

I am quite surprised when the album evolves. Slow, long tracks fill my head. Fully developed instrumentals heavy with atmosphere and will power. Musically the film is quite alright it seems, although, if I ever get to see it, undoubtedly I will hardly notice it. Because of this soundtrack I found out the it features Zoë Kravitz, the daughter of Lenny and Lisa Bonnet. Despite visiting a movie theatre regularly, it is possible to have never seen one of her movies.

Mogwai manages to come up with several interesting themes in the nine tracks KIN counts. They are explored in such ways that most are interesting to follow and allowing me to grow into. Without ever being to intrusive, with notable exceptions that may not be in the movie, Mogwai manages to hold my attention and that is more than any movie score has been able to say for itself up to now.

No, I do not expect to become a film score fan any day soon, KIN however is more than that and could be a regular album, I guess. Fascinating how music can surprise me. The final song, 'We're Not Done (End Title)', has lyrics and a voice. The guitars are shredded extra loud and with some imagination I can hear the song being played on the radio, which it will not. Too far fetched from the stuff they play there nowadays. Mogwai sounds like Norwegian progrockers Soup here, and I am fully aware which band is the oldest. So, yes, another pleasant surprise. Perhaps some more listening to Mogwai is required?

You can listen to and buy KIN here: