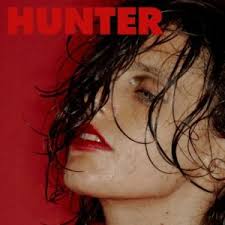 And the silence lasted five years, to paraphrase Golden Earring. If I remember correctly I reviewed Anna Calvi's previous album with the then new Paul McCartney and nearly five years later both return with a new album.

What I've read so far tells me that Anna Calvi goes all over the top and beyond on Hunter. There's nothing holding her back. What I'm hearing though tells me a different story. I had the honour to be present at the rendition the Stargaze Orchestra played of David Bowie's 'Blackstar' album early summer in the Concertgebouw, starring, among others, Anna Calvi. If Hunter holds anything it is the spirit of David Bowie. Without copying or rehashing the dead master, Hunter plays with Bowie's idiom and comes up trumps.

Hunter is Anna Calvi's third solo album and growth is spelled in capital Gs on the album. There's depth, fun, some great playing and singing. And some exorcising of old demons. If Colin Malloy can sing 'I'll Be Your Girl', Calvi can sing "don't beat the girl out of my boy". She screams like her head is twisting around her neck, but comes out on top once more. Back to the tu-tu-tu the song started out with. A nice poppy wrap around a heart-wrenching song. That takes some courage to execute, it tells me.

Let's return to the start of Hunter. The guitar is chugged in a muted way. Calvi wonders what it is to be a man. One of the main themes of Hunter in the sense of gender being important in the lyrics. Slowly the song is fleshed out. With bigger drums, more guitars. The delicateness is replaced by substance, by male muscles if you like. Frailness and boldness are inter-substituted almost by the word. An impressive way to start an album alright.

In the title song just a bass drum and a form of breathing start the song. 80s synths and Twin Peaks' bass notes chime in. This is all darkness. The kind of music that can lead to anything. A promise of beauty of excitement or the precipice. As already noted, Bowie is in the singing and the lead guitar. Twin Peaks' red light on the dark, windswept intersection even features in the lyrics. Anna Calvi sets the bar for her album even higher. Perhaps no climax in 'Hunter', she "trust(s) herself in leather and flowers in her hair". Again tough versus frail. The climax is in the details of the song. The guitar eruptions, the "Twin Peaks" bass notes.

Although I have to admit not having played her previous albums for some time, instinct tells me that this album outstrips them easily. The fact that I keep returning to it so easily, is a give away alright. That may have to do with the delicate balance Hunter presents me. Nothing is one dimensional, there's loads of little details to discover in the overall great songs, and Anna Calvi presents all these different sides to her being, her music and her singing.

In this Calvi is not afraid to put in a kind of song that reminds me of movie theme's of the 70s ('Swimming Pool'). The sort of melody that seems to sweep everything in front of it away. Long drawn out and full of pathos. The grandness is something returning in most songs. There certainly is no modesty involved in Hunter. Calvi know what she wants and knows where to get it. The result is a few songs that may be bare in essence, but always have this intrinsic grandness within them. Whether in the details or all over, it is easy to spot, every time.

Finally, Anna Calvi herself shows how ready she was for this album. Not one hint of doubt left in her. This is the whole of Anna Calvi, with only the question remaining where it will lead her next. In that she is on the same par as Courtney Barnett on her latest effort. For both there are no doubts as where they stand in life and in their career. Somewhere on top.

You can listen to and buy Hunter here: