On The Corner Where You Live. The Paper Kites 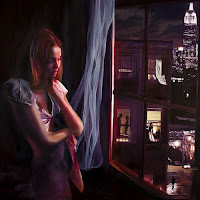 Well, this is the kind of album that I really have to let you, reader, decide for yourself what to make of this album, without some nudging in a certain direction.

The Paper Kites is a band from Melbourne, Australia. The five piece, four men and a woman, has released three albums before this one of which 'Twelvefour' came to my attention some years back, without making much of an impression.

When I'm in a good mood, for On The Corner Where You Live that is, I hear how smooth the songs flow, the Lindsay Buckingham guitar quality. Not to mention the overall Fleetwood Mac influence on The Paper Kites in songwriting and singing. The beautiful, exceptionally easing opening, instrumental song 'A Gathering On 57th' gets to me immediately. Late night jazz with a great pop feel attached.

When I'm in a bad mood for this album, the music just drags on and on, nothing seems to happen and the bathroom sound just gets to me really badly. Somehow then the band then seems like a bad copy cat of a band like Half Moon Run where I can listen to always.

Seldom does an album get to me in two so totally different ways the way On The Corner Where You Live does. Normally I either like an album or I don't. It doesn't work that way for The Paper Kites' latest effort. Intriguing, isn't it?

It's time to let you decide for yourself, for once without a pressing advice attached.