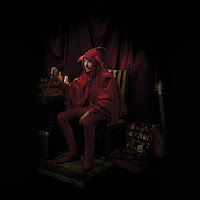 For what ever reason I had expected to hear a pianist playing neoclassical compositions, anything but what I was hearing when I put on The Jester for the first time. Yes, I found the cover art somewhat frivolous for the genre, but is there a law against frivolity in classical music?

What entered my ears was a form of pop that I have been hearing for most of my life and have been a sucker for about as long. This is 60s all the way with references to psychedelia, the Rickenbacker 12 string of Roger McGuinn and The Hollies singing melodies, while not being afraid of doing the same with an Oasis flavour as in 'Miss Serene'.

Van Norden at 32 has delivered more than just jangly 60 infused songs. Move further into the album and you'll find far more complex structured songs. Strings enter the whole and definitely change the essence of The Jester. Whole suites enter the whole. Something hard or probably impossible to recreate live. (See for more ambition and musical similarities our review of The Stream's 'Sweet Sally Sad Departure': http://wonomagazine.blogspot.com/2018/04/sweet-sally-sad-departure-stream.html) My recently revived interest in the Moody Blues, is tickled immediately. It seems that Yorick van Norden was able to express his most inner wishes on this album, against all the grains of developments in the music industry.

It is a bold move to present two such very different approaches to his music in one record. It may have made more sense to release two mini albums, it does present the world with an album that is at least three dimensional. Perhaps even five....

Let's go back to the start. The Jester opens with 'The Forest Of The Mind'. Jangly sounds makes the listener return to 1966-67 when the sitar was brought into pop music, soon followed by the LSD inspired Mellotron. At the same time some more modern elements bring Kula Shaker back to mind. So we already have a bridge to the mid 90s! and there's Jacco Gardner, so here we are nearly home. 'The Forest Of The Mind' is totally psychedelic. Playful, yet serious beyond comprehension. The song holds it all.

'Train In The Station' brings The Byrds into the equation with its Rickenbacker guitar sound at the fore. The song is far less adventurous, more basic, yet shows the songsmith Van Norden is. He knows exactly how to make a decent popsong with all the elements that made up hits around 1967. That is not a help in 2018, but will please many people enjoying nostalgic moments (for songs from a time they weren't around also, I hope).

These descriptions will give you the right impression to get you through side A comfortably. Time to move on. Van Norden had some songs lying around that were not really going anywhere, so he decided to do "an Abbey Road". Together with Reyer Zwart, who came up with all the arrangments for strings and horns, he created a totally other side B.

On this album side Yorick van Norden and Reyer Zwart unleash their inner Brian Wilson and Lennon-McCartney. 'Unbelievable' the first part of 'Suite 1' has as subtitle. Gone are the psychedelia, enter classical accompaniment, like e.g. 'Eleanor Rigby'. The ballad that follows as part 2 has an acoustic guitar at its basis, but holds a flute and female vocals and is damn right beautiful. As I said there is a comparison to The Stream, just listen to 'A Song For You'. The song could have been written by Jan Stroomer. All piano at heart and different from all else here.

The changes go on per song to end it all in an orchestral climax at the end of 'Suite 2'. By then the listener has been taken on a musical adventure that could not have been more surprising having heard the start of the album. It is not even that I deeply like each individual song, I do not, as a whole Yorick van Norden shows heart and courage on The Jester and this is to be commanded. The Jester is the kind of album that every lover of pop music ought to give at least one try. Most likely that will be enough to either endear immediately or to encourage further listening. It is simply fantastic that records like The Jester are still made.

You can order The Jester here: