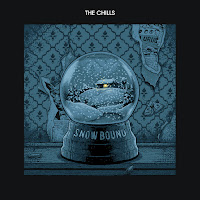 The only snow humans totally control is the fake snow in a glass ball, so fascinating to children, pictured in the artwork of Snowbound, the new album by New Zealand's The Chills. That prompts a question: Is the musical as artificial as the snow in the glass ball?

The Chills is a band that is around off and on for 38 years in 2018. There is one constant factor, singer/guitarist/songwriter Martin Phillipps. The list of past members is long, although some current members are around for several years. The band scored one international hit in 1990, 'Heavenly Pop Hit'. It all passed me by. Having played it, it didn't ring any bell.

So come 2018 and here's my introduction to The Chills. My first thoughts are twofold. One, Phillipps knows how to write and arrange songs. Two, I have a very hard time warming to the individual songs. The songs are somewhat sterile and cold. There always is a barrier between me and the warmth behind the snowbound band. In style with the band's name? So answering my question above. No, the music is far from artificial. In fact there are many elements in the music that in other circumstances would win me over immediately, like it does in 'Scarred', the fourth song on Snowbound. A fine rhythm, handclaps and all, over which an organ or synth play delicious lead notes. This song holds it all.

All in all the 80s are never far away. Those who want to can trace elements that make up A-Ha, Pet Shop Boys and the like. Yet, the organ sound of The Stranglers can be found as well ('Complex' holds it all.) The fierce rock rhythm binds the different influence together, so somehow New Order emerges. O.k., it sounds all far from original, but 'Complex' is a tremendously upbeat and enjoyable song. One to cherish.

Like last year with Robyn Hitchcock and earlier this week with (Wolfgang) Michels I am writing about an album of long standing artists without any foreknowledge of their respective careers. Which is fun in a way, as I can listen without prejudice and without the need to compare (as with Paul McCartney yesterday). For all three, things turn out favourably, without being able to speak of listening to masterpieces.

Snow Bound over all is a fine album containing several songs that hover between indie rock, 60s and 80s pop. The Chills manages to come up with music that presents a nice mix. My first comments remain in place though, also after several sessions with the album. As is shown here, these reservations are certainly overcomeable.

You can listen to and buy Snow Bound here: