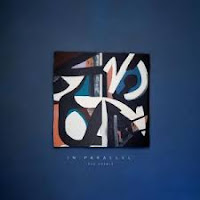 Some albums have a tendency to simply keep going. More or less in one tempo, keeping up the same atmosphere over several songs. Usually these albums have a hard time to remain interesting and invest listening time in. In Parallel is such an album. A level-headed album without overly frivolities or other niceties. So where do I fare with Rue Royale's 8th release and 4th LP?

The fact that I am writing is a sort of give away of course. One solution is playing the music somewhat louder. All sorts of nuances come forward that remain more or less hidden when played softer. The, at times, huge drums really make an impression that way.

Rue Royale is a duo from Chicago, that moved to Nottingham in the U.K. in order to tour Europe more easily, Brookln and Ruth Dekker. Between the 2007 and 2013 7 releases saw the light of day. After five years of rest and a family extension it is time for new music: In Parallel.

Listening more into In Parallel I notice that the even atmosphere is attributed more to the way the Dekkers sing, not unlike Low, soft and subdued. A modest duo they are. When played in the background the album remains something in the background. It's great to play during dinner or late at night while reading the newspaper's harder to digest articles.

In Parallel comes alive with a headphone on or when played loud(er). It is then that it starts revealing its inner secrets. The creativity and hard work put into the album certainly pays off this way. Listening closer the album contains many layers in the music. Part organic and part digital, where it contributes to the Dekkers' taste. The details are the dead giveaway how much work has gone into completing this album. An extra guitar part here, the soft rhythm and exploding drums, little sounds and used effects, keyboards that come in and add to the whole in a beautiful way.

All this makes In Parallel an album for different occasions, greatly adding its value. My girlfriend can play it the background when meeting with friends, it is played during dinner and I listen to it when I really want to listen to beautiful music with nothing distracting me then the ploys of the songs on In Parallel.

I will not go as far and call In Parallel special. For that the album has too many familiar sounds. It certainly is a valued addition to my record collection I will return to regularly.

You can listen to and buy In Parallel here: