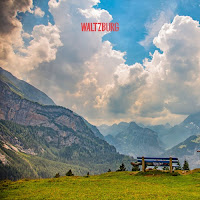 The cd cover almost gets one fooled. Waltzburg, a small village somewhere in the Alps advertising itself on a nice post card (from somewhere in the 70s). The public bench overlooking the valley, undoubtedly after a strenuous, but rewarding hike up the mountain.

No such thing though. Waltzburg is a Dutch band, releasing its first EP. An EP filled with four songs, as an EP should, that are gay, spread joy and filled with optimism. The kind of music that is able to lift spirits immediately.

The first time I listened to just snippets of each song, I already felt better than I did just seconds before. Not all music has that quality. The more surprising is this description I found on the Internet: "Waltzburg maakt eigenzinnige en melodieuze upbeat indie, geschreven door een pessimistische slaapkamer producer..." (Waltzburg makes willful, melodic upbeat indie, written by a pessimistic bedroom producer (translation Wo.). O.k., the first part is certainly a correct description, the second part I have to take for granted or is simply lost in band translation.

Waltzburg is a band from Nijmegen in the east of the Netherlands. A bunch of friends who played music and drank beer, to grow slowly into Waltzburg, a band with obviously a higher level of ambition than to just drink beer and have fun. For that the first four songs to be released together are too serious, in the sense of well worked out and catchy.

This EP is the sort of album that ought to catch the ear of lovers of indie pop rock. The clear sounding high guitar lines, the tight rhythms of drum and bass, intermingle with the keyboard and (harmony) vocals. Together with producer Simon Akkermans Waltzburg was able to record in Kytopia in Utrecht. The hard work paid off. Not unlike The Royal Engineers' mini album of two years back, Waltzburg has found that mix of serious indie rock and pop (while skipping the Gruppo Sportivo elements).

Not all is well though. In 'Ghost' a stop start style figure is carried on too far, where I am concerned. The song simply becomes irritating after a while. In 'Neon' the same dynamics are used, but this time with the right effect. The 80s guitars sound like nostalgic fun and the melody itself is much stronger. Without copying in any way, 'Neon' has something of Duran Duran.

'So Long See Ya' is much tougher. The drums are present the whole time, keeping the song going ever onwards, full of power. Bowwowwow is revived in the female background vocal. For me this song is the winner of this EP. The band has found all these extra little and bigger melodies within the context of the song that make 'So Long See Ya' nearly irresistible.

The same goes for the opening song. A lot of dynamics, while one or another instrument keeps up the rhythm and that is not necessarily the drums. 'I Am Not The Blindest Man You Know' is the kind of song that draws me into an album. Also here Waltzburg found a host of melodies to embellish its song. Indie pop at its best.