What a Terrible World, What a Beautiful World. The Decemberists 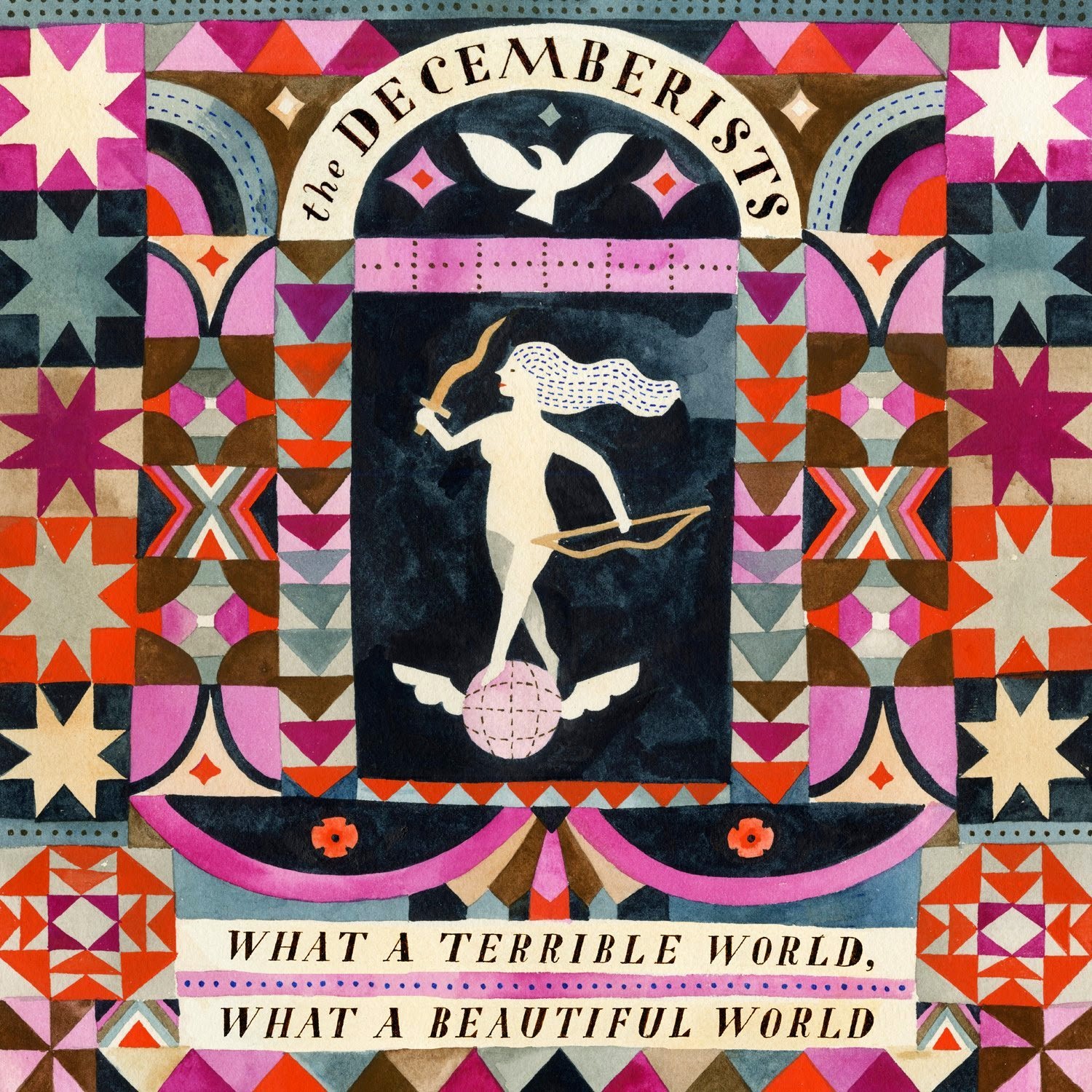 I have come to the point that I have to admit that when a new The Decemberist album is released I know how it will sound, what sort of songs to expect and above all the voice of band leader Colin Meloy. A voice one can recognise from thousands of voices. Very typical. Seven albums into the career of The Decemberists I am at that stage. This made me not put What a Terrible World, What a Beautiful World high on my list of having to listen to new albums. Boy, was I wrong.

'16 Military Wives' was the song in 2005 that attracted me to The Decemberists, but it wasn't until the band's opera 'The Hazards of Love' (2009) that the band really landed with me. What a great work. It paled all that came before and after it. 'The King is Dead' was sort of o.k., but couldn't stand up. The live album was fun and reminded me of the fact that I still haven't seen the band live. So what to expect from this new album? My expectations were not very high.

The short version is that What a Terrible World, What a Beautiful World is a fantastic album in which The Decemberists allow in early 60s girlband's harmony vocals and The Hollies like melodies and guitars, e.g. in 'Philomena'. The music is as colourful as the album cover is. In the four years that divide 'The King is Dead' and What a Terrible World ... Colin Meloy has received or let in a lot of light in his songwriting. "To make me better", he sings in the song with that title. Despite the fact that "We're not that starry-eyed any more", life seems to be treating him well. The female voices around him lift the song up as a relationship that has deepened past infatuation into true love.

One review I read accused the band of a lack of ambition on this album. I could not disagree more. The band allowed itself to unwind some of all the extras that were always present in its songs and lets out the inner beauty. The vocal melodies are intricate, like the harmonies provided by one of the many ladies that sing them. Just like the the piano melody and the solo guitar interact in almost lazy way in 'Lake Song'. Every note that they play is in the right place, creating beauty. Together with producer Tucker Martine The Decemberists created what I am starting to dare call a masterpiece of sound, melody and performance. Thinking in stars, a 5 out of 5.

Man, do I love musical surprises like these. Not expecting much and being blown off my feet in an ever so delicate way like the music on What a Terrible World ... is: delicate, frail, but strong like an autumn gale. An earth force in music.

Not everything is perfect. A song like 'The Wrong Year' is sort of average. The accordion and guitar lines make up a little for the bland sounding strings and vocal melody. This is corrected as soon as the blues is let in 'Carolina Low'. This is The Decemberists down to the most elementary level. Colin Meloy with his acoustic guitar and oohs and aahs in the background and perhaps some faint electronics weaved into the singing. Spinechillin' good. From the blues right into his Celtic roots, a mood which does not directly leave the album.

The 60s surf guitar carries the aptly titled 'Easy Come and Easy Go'. So chill, so relaxed. And with all these little references in the last few sentences, I come to another fine point of What a Terrible World ..., it's diversity. It has all these different sounds and approaches, making for a very fine mix of tunes. While the overall approach of the band and Meloy's voice keep it all together, it allows for so much diversity, including Bob Dylan like harmonica playing.

In '12-17-12' individual happiness clashes with general disaster. Meloy's fatherhood runs into the Sandy Hook natural disaster. "Oh my God, what a world you have made here". Hence the album title. 'A beginning Song' leads us out of the album, with a bang. At least compared to all that went on before. The only hint at rock is in the crescendo at the end of the album. A beginning of a new album? Louder? We'll have to wait and see for a few more years.

With What a Terrible World, What a Beautiful World The Decemberists seems to have reached a new peak in its career. Four years of quiet seems to have done the band good, given it new focus and 14 fabulous new songs. I'm left in awe and leave you with a motto on this album that brings it all sort of down to earth: "All I wanted in this world, is to live and see a naked girl". My guess is Colin Meloy has.

You can listen to 'Make You Better' here: